Before he was playing Negan on The Walking Dead he was handling a different problem in a horror movie. Sure, one of his most recent roles had him as the big bad, a truly awful guy on the television show. But he only leaned into that kind of role recently. There was a time when he was more of a nice guy type, a real family man if you will. Now you have a chance to catch the actor playing an innocent in a horror movie that’s streaming on Netflix. The Possession hit the platform on April 1st and has the chance to really give you the creeps.

In The Possession, Jeffrey Dean Morgan is a divorced father who innocently enough takes his daughter for the weekend getting a little family time. All starts off simply enough with the two enjoying some time together. But then Morgan’s character makes a movie mortal sin when he takes his kid to a yard sale and they buy a creepy-looking box with etchings all over it. Anyone who has ever seen any horror movies knows that this is only going to lead to a disaster later. These things are almost always haunted and that’s, of course, the case with this box.

Jeffrey Dean Morgan doesn’t notice anything at first with his kid as they explore the box. The thing is a bit odd but isn’t necessarily exuding bottomless evil, yet. But it doesn’t take long before the kid starts acting just a little odd, weirdly obsessed with the box and becoming prone to spacing out. A warning sign (if you will) comes when he interrupts his daughter eating pancakes and she has the response to stab him in the hand with a fork. It’s right around now that I’d think about returning the box to its rightful owner (some demon) and be done with it. But these folks don’t see the light of day quite soon enough. Here, check out the trailer for The Possession.

As you can see, the whole situation gets progressively worse. Jeffrey Dean Morgan seeks help from some religious folks when he finds out the box is actually a dybbuk box which, in Jewish culture, can contain demons. Of course, it didn’t say this on the yard sale tag, so you can’t totally blame the character even if they were a little slow to the east to the weirdness happening around them. There are various exorcism-like ceremonies that attempt to undo the horror, but we know this is the word of movies and things just aren’t going to be that easy. The demon is going to make everyone’s life a literal hell before it’s all said and done.

Joining Jeffrey Dean Morgan in this fight against yard sale evil is Kyra Sedgwick who plays his ex-wife. Natasha Calis plays Emily, his daughter who turns to the dark side sooner than expected. Singer and performer Matisyahu makes an appearance as a rabbi who knows how to deal with the darker sides of this issue. It is supposedly based on a true story about the dybbuk box, but I think we can take that designation with a veritable grain of salt.

The Possession scored on the more negative side of things with critics, sitting at 39% on Rotten Tomatoes and 45 on Metacritic. For many, it was too paint by the numbers when it came to mining the scarier aspects of the film. And though it’s supposedly derived from an actual real-life thing, the plot points follow too familiar a path. Jeffrey Dean Morgan is good in the lead role as the father looking for answers as are some of the other players, but the script is formulaic. That being said, this kind of film can still hit for the genre and if you are a fan of these films then it has its place.

As for Jeffrey Dean Morgan. He’s still kicking around as Negan on The Walking Dead which is entering its 11th season. It’s a testament to his character’s pure evil that the writers have wanted to keep him around. He’s definitely leaned into the part over the years. Next up for the actor will be the movie The Integrity of Joseph Chambers which is currently in post-production. He’s also coming off another horror movie in The Unholy which came out last year.

If you are looking for a standard horror movie replete with demons, possessions, creepy relics, heavy religious overtones, and a little Jeffrey Dean Morgan then go over to Netflix and check out The Possession. 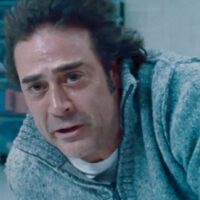