Jeffrey Dean Morgan is upset that the Negan spinoff series wasn't kept a secret until the flagship series came to an end.

Over the years, Jeffrey Dean Morgan has become a pop culture icon due to his roles in Supernatural, Grey’s Anatomy, and Watchmen. His ability to play a range of complex characters is a testament to his acting talent. So it’s not surprising that the actor is upset with how his Walking Dead character’s spin-off was revealed. He believes the upcoming show should have been kept secret until the flagship series ended. Speaking to Entertainment Weekly, the actor expressed dissatisfaction with how Negan and Maggie’s new series was announced.

He lamented the lack of secrecy associated with Isle of the Dead, which reveals that the characters will survive the events of the original show. Jeffrey Dean Morgan said if it was his choice, he would have handled the reveal differently. “That’s not the way we should have gone about it. But this is how it was chosen to play out,” he told the publication. “Maybe we couldn’t have kept the secret. But it seems to me we could have given it a shot.” The Walking Dead star added that the final decision was above his pay grade.

The 56-year-old has played Negan to perfection since The Walking Dead’s season six finale, appearing as the leader of the Saviors, before becoming an ally to the main cast of survivors. The final season sees Negan trying to earn the trust of the main cast. This includes the development of a strained relationship with Maggie Rhee, whose husband Glenn was one of his first victims when Jeffrey Dean Morgan’s antagonist was introduced. The actor received critical acclaim for his performance on the show and earned various awards for his efforts.

Developed by Frank Darabont, The Walking Dead is based on the comic book series by Robert Kirkman, Tony Moore, and Charlie Adlard. The 11th season of The Walking Dead sees Jeffrey Dean Morgan following the group’s encounter with a large network of communities with advanced equipment and over 50,000 survivors living in different settlements. It also explores the confrontation with the Reapers, a mysterious faction of hostile survivors that attacked and took Meridian. The season premiered on August 22, 2021, and is expected to conclude on November 20th.

Once the flagship series wraps, fans can look forward to seeing Jeffrey Dean Morgan and Lauren Cohan reprise their roles as Negan and Maggie, respectively. While there isn’t much information about Isle of the Dead the offshoot of the long-running zombie drama will follow the characters to New York City. Cut off from the mainland for ages, the crumbling city is filled with the dead, and denizens who have made the metropolis their own world full of anarchy, danger, beauty, and terror, TV Line reports.

Jeffrey Dean Morgan and Lauren Morgan and Cohan aren’t the only stars returning to the world of The Walking Dead. The Walking Dead spin-off series, Daryl & Carol will feature Norman Reedus and Melissa McBride as the titular characters. Created by Angela Kang and Scott M. Gimple, the show is set to premiere in 2023 after the 11th season of the main series ends. 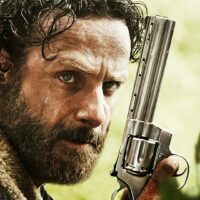