There are icons in horror movies and then there are icons in horror movies. Jeffrey Combs is an icon. Whether it be a B-movie, low budget, or even a higher-end horror flick, Jeffrey Combs has made a name for himself throughout the genre. His career dates back close to forty years and his resume is lengthy. But what has the horror legend been up to lately?

It’s always best to start at the beginning so this will be no different. Jeffrey Combs began his acting career in high school and carried it over to his studies in college, developing his skills at the University of Washington’s Professional Actor’s Training Program. His first role came in the feature Honky Tonk Freeway and he followed that up with Who’s Life is it Anyway?

It was a short two years later that Jeffrey Combs began acting in a genre that would continue throughout his career. It was his first role in a horror film, Frightmare. He jumped to another horror film immediately after, starring in The Man with Two Brains. His next role would be as the character he is probably best known for.

Re-Animator was the movie that put Jeffrey Combs on the horror map. The Stuart Gordon picture, which received an X-rating upon its initial edit, told the story of Herbert West (Combs), a medical student who has invented a reagent. This serum allows dead bodies to reanimate. He and his classmate begin to test this reagent on dead bodies, ending up battling it out with a fellow doctor who wants to claim the reagent as his own.

The gory feature went to the movie theaters with an X-rating or unrated but when it came to video rentals, producers cut the movie to give it an R-rating as certain video stores wouldn’t allow movies to rent that had an unrated label on it.

Re-Animator wouldn’t be the last time Jeffrey Combs would play the character. He became Dr. Herbert West for the sequel Bride of Re-Animator, which was played much more for laughs than the original. Along with Combs, Bruce Abbott and David Gale reprised their roles from the first film.

13 years later saw Jeffrey Combs return to his famous role in Beyond Re-Animator. This time we find Dr. West behind bars, who has been left there to rot. Now, though, he finds himself another ally in a young doctor who would like to follow in West’s footsteps. Combs is the only actor from the first two to return though Brian Yuzna, who filled Gordon’s shoes for the sequel, returns again as director and writer (he did both for Bride of Re-Animator). This role defined Combs’ career, something he has never shied away from, even though he has gone on to star in many, many more horror films.

Just as Combs was carving out his niche in features, he was also making a name for himself on TV. He’s been in plenty of TV series, some horror, some not. These include Beauty and the Beast, Jake and the Fatman, Freddy’s Nightmares, Hunter, The Flash, Ultraman: The Ultimate Hero, and Babylon 5. There are just a mere few series Combs has been involved with. If we were to list all of his TV series’ accomplishments, we’d be here a while.

But while Combs was making these early-career appearances on TV, he was also crossing back over to feature films. Besides his genre making roles as Dr. Herbert West, Combs found himself in features such as The Pit and the Pendulum, Norma Jean & Marilyn, The Frighteners, Time Tracers, House on Haunted Hill, I Still Know What You Did Last Summer, and Faust. And believe it or not, this only brings Jeffrey Combs acting career to the new century. The man has had an extremely busy career.

While Jeffrey Combs is best known for his horror resume, he is also known as the only actor who to play nine different characters within the Star Trek franchise.

Jeffrey Combs began his Star Trek voyage on the TV series Star Trek: Deep Space Nine. There he played numerous characters, but was especially pivotal as the villain Weyoun. Technically he actually played multiple Weyouns, since Weyoun was a clone and he gets killed and re-cloned a few times. Every time the Dominion makes a new clone, we got a new Weyoun, and a new character played by Jeffrey Combs.

Jeffrey Combs’ role on Deep Space Nine was the longest of his Star Trek career. On that show, he played five different characters (again if you count Weyoun as only one) in all. Those were: Tiron, Brunt, Officer Kevin Mulkahey, a Holosuite Guest, and the longest one Weyoun. According to Combs, of all the characters he’s played on Star Trek, Weyoun was his favorite.

AS THE CENTURY TURNS

Jeffrey Combs continued to make the horror realm his own after Star Trek. But Combs was also branching out, finding more TV work as well as more voice work. Voice-wise, Combs could be heard in series such as Spider-Man, Justice League Unlimited, Super Robot Monkey Team Hyperforce Go!, Batman: The Brave and the Bold, The Avengers: Earth’s Mightiest Heroes, Doom Patrol, Transformers Prime, Hulk and the Agents of S.M.A.S.H., Transformers: Robots in Disguise, and Tigtone.

His TV work included such series as Cold Case, The 4400, Chadam, Criminal Minds, and Creepshow. When it came to feature films, Jeffrey Combs continued to either go with bigger parts but had no problem just showing up for a quickie. He was in Feardotcom, All Souls Day: Dia de los Muertos, Edmond, Satanic, Abominable, The Wizard of Gore, Parasomnia, Dark House, Urgency, Dorothy and the Witches of Oz, and Elf-Man. Again, these are just a few of his many accomplishments.

Even at age 66, it doesn’t look like Jeffrey Combs plans on slowing down any time soon. In the past few years, Combs has been involved with plenty of voice work, plenty of series work, and plenty of feature film work. His last few projects included Holiday Hell, Pandora, Age of Stone and Sky: The Sorcerer Beast, and Unbelievable!!!!! He even has another horror picture waiting in the COVID wings with Stream.

Combs also just appeared in the new Deep Space Nine documentary What We Leave Behind. There he talk about his time on the Star Trek series and what it meant to him to play a character like Weyoun.

If you haven’t caught a Jeffrey Combs movie, you’re missing out. He can be over-the-top funny or even downright scary. He fits into almost every type of film, but horror is his thing. Look him up, find a flick where he isn’t just passing through, and enjoy. Maybe you should start with Re-Animator. 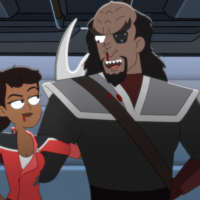