With the iconic Star Trek franchise just blowing up in the short term, expanding and getting all kinds of stories and shows, it’s no wonder we are being treated to new futuristic stories while also getting plenty of nods to the “past”. And in this expansion of the universe, old characters are all coming back into the mix. One of them will be the iconic Captain Kathryn Janeway who will come back in one of the many new Star Trek series hitting screens this year. Now we have our first chance to see what the *new* character will look like. That’s because this version will be animated in form on the show Star Trek: Prodigy. And from TrekMovie we are getting some of our first looks at what Janeway’s new look.

Captain Kathryn Janeway will make her animated debut on the new series and will be voiced by Kate Mulgrew who occupied the live-action role in the past. This much had been known with the show making the Mulgrew casting one of their original pieces of news when the show was announced. Well, now we know what this character will look like and what “form” she will take. That’s because in the new series, Janeway will be in hologram form, helping to guide these new characters on their space adventure. Check out the new look:

In many ways, this version of Captain Janeway is a new character. The general idea behind Star Trek: Prodigy is that a group of teenagers stumble on a Starfleet ship and end up taking it for an intergalactic joyride. It’s a new style for the Star Trek universe in that the characters are of a younger variety than we’ve seen before. And it’s an animated series definitely geared to a pre-teen crowd. When the group commandeers the ship, Janeway’s character appears as the Emergency Training Hologram. In this way, the character is going to remain a timeless feature of the franchise. Though the actress Mulgrew has moved on, bringing on the character enables them to go well into the future with the original “casting” intact.

Captain Kathryn Janeway was the lead character on Star Trek: Voyager. The show ran for seven seasons, telling the story of the titular ship and its adventures through the cosmos. She was the first female lead character in the franchise, marking a pivotal moment for Star Trek and its programming moving forward. That the show was a success over a longer period of time was a testament to the story and Mulgrew’s turn in the lead role. She reprised it a few times on other programs in the franchise.

Bringing back Captain Janeway has been known for sometime, with the news announced a few months ago. But seeing it here in the animated, hologram “flesh” is very cool. The look is updated for a more modern time of course but the hallmarks from the original character are still there. The Starfleet captain uniform and hairstyle are reminiscent of Mulgrew’s character and we get the throwback to Star Trek canon. It’s an incredible time in the Star Trek franchise, blending the old and the new together to make for awesome programs on the horizon. 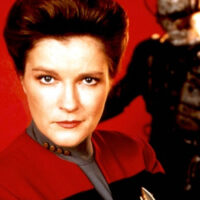