Jake Gyllenhaal has many fantastic performances on his resume, and one of the best of them is streaming for free right now.

Amazon Freevee may not have the name recognition that some other subscription streaming services do, but it should be one to look out for when it comes to premium content. Rebranded from its previous moniker of IMDb TV, Freevee is a free streaming platform that enables users to watch entertainment channels 24 hours a day, 7 days a week, which often include original series and movies that viewers won’t find on other platforms. Some of these might be familiar names like recent addition Love Accidentally, as well as the Freevee Original series Hollywood Houselift with Jeff Lewis. One movie, in particular, is currently streaming on Freevee for no charge, Source Code, and it’s a flick that helped propel actor Jake Gyllenhaal to superstardom after a string of independent features that helped establish Gyllenhaal as the go-to actor of the 2000s.

According to JustWatch, Jake Gyllenhaal’s Source Code is available to stream on Hulu, but viewers can watch the action thriller for no fee by downloading Freevee. Source Code was directed by Duncan Jones and was released in theaters in 2011. The movie had its world premiere at that year’s South by Southwest and eventually grossed over $147 million against a budget of $31 million. Coming off of his successful directorial debut with 2009’s Moon starring Sam Rockwell, Jones took on Source Code before venturing into unknown territory with 2016’s Warcraft and 2018’s Mute. To date, Source Code is one of Jones’ most profitable films and arguably the most fun.

Source Code stars Jake Gyllenhaal as a man who wakes up in someone else’s body on a Chicago commuter train, not remembering how he got there. He believes that he is Captain Colter Stevens, a U.S. Army pilot fighting in Afghanistan, but to others, he is Sean Fentress, a school teacher. Also on the train is his friend Christina, played by Michelle Monaghan, who doesn’t understand Stevens’ confusion. The train suddenly explodes yet Stevens survives and quickly learns that he is part of a government conspiracy to locate the bomber of the train. With a story similar to Bruce Willis’ character in Twelve Monkeys, Stevens is sent back in time just before the explosion and must do what he can to find the bomber. Source Code also stars Vera Farmiga, Jeffrey Wright, and Scott Bakula.

When it was released in theaters, the Jake Gyllenhaal-led Source Code became a hit with critics and audiences alike. As it stands currently, Source Code is ranked on Rotten Tomatoes with a 92% on its Tomatometer from 265 verified critic reviews, making the film certified fresh. It also had an 82% Audience Score from over 100,000 reviews from users to the site. Similarly, Metacritic ranks the movie with a Metascore of 74 based on 41 critic reviews and a 7.7 User Score from 785 ratings from viewers, which typically denotes a generally favorable rating from critics and audiences.

As far as Jake Gyllenhaal performances go, Source Code is a rare feat from an actor that tends to play it close to the chest. With a stunningly memorable role opposite Heath Ledger in Brokeback Mountain, which saw the actor earn his first Academy Award nomination for Best Supporting Actor, Gyllenhaal took his career to new heights with major parts in Jarhead and Nightcrawler. The actor that showcased his talents in independent features like Donnie Darko chose to elevate the science fiction genre by embodying the protagonist in Source Code to great success. According to SlashFilm’s ranking of all of Gyllenhaal’s performances, Source Code lands in the top ten of the 15 best movies the actor has done to date.

Source Code is also noted for its mix of science fiction, mystery, and murder. Written by Ben Ripley, the film laid the groundwork for some of Ripley’s later work including 2017’s remake of Flatliners starring Elliot Page and Diego Luna, as well as the upcoming Blacksmith, starring Laurence Fishburne. Recently, it was revealed that a Source Code sequel may be in the works, but it doesn’t appear that Jake Gyllenhaal or Duncan Jones are confirmed to return yet. Nevertheless, audiences can still watch the original film on Hulu at this time for a fee, or on Amazon Freevee for free. 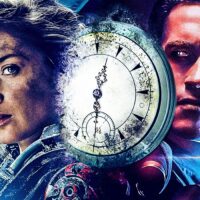 A Time Travel Classic Is Big On Streaming