Indiana Jones 5 is set to be the last story of the swashbuckling archeologist with Harrison Ford in the lead role. It’s been an epic run, spanning four decades now. With this next installment currently filming, we are starting to see how the next story will shake out. One of the clues that just came out was the possible title of the film revealed. Will this title give us a sense for how the story will develop? It could with Indiana still fighting bad guys on multiple fronts.

The latest rumor about Indiana Jone 5 comes from YouTuber MR H Reviews who posts about movies and video games. He says that he caught a glimpse of the first page of the script and it was titled Indiana Jones and The Order of the Elysium. Now, this hasn’t been confirmed, but there are many out there now who firmly believe this to be, at minimum, the working title of the film.

Apparently, this leak for the Indiana Jones 5 title also popped up on Reddit as well. Who the Order of the Elysium could be isn’t known, but here’s where we can speculate some. It’s already been out there that the next film will move the timeline ahead to 1967 and involve the Space Race between the United States and the USSR. This is prior to the 1969 moon landing, but apparently will involve NASA as a part of the story.

Additionally, there’s word that Mads Mikkelsen will play a former Nazi scientist who is now working in a high-level position within the government. This is likely to mirror Operation Paperclip, a secret endeavor by the United States government to bring Nazi scientists over to the States following World War II. These scientists were tasked with helping NASA develop rockets and other craft to compete in the Space Race. In the movie, it looks like Mikkelsen’s character will be part of this Operation.

But what could The Order of the Elysium mean for Indiana Jones 5? Elysium could reference the Greek idea of heaven, the Elysian Fields. It was thought of as a place to live in the afterlife that would mirror a regular life but with only happiness and enjoyment. Another rumor has it that Mikkelsen’s character will be using his position in NASA to actually try to turn back time and revert the past so that Germany actually won World War II. Could this be the Nazi’s version of Elysium? Their “happy” place is a world where they actually came out the victors in the conflict and shaped the world as they saw fit? It makes some sense.

Time will tell what happens with Indiana Jones 5, but we are definitely getting more news now that filming is underway in New York City. But there could be some delays now. It came out last week that Harrison Ford had been injured on the set while filming, hurting his shoulder while in a fight scene. It was bad enough that he’s had to leave the production for the time being to heal. I guess that can happen when a 78-year-old decides to start trading blows. Regardless, we are still going to get this final movie in the franchise and it could bring to a close the character’s whole storyline. 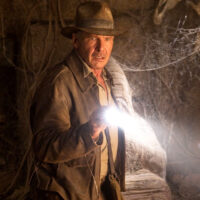