House of the Dragon could be changing the Game of Thrones ending to match George R. R. Martin's books.

One of the biggest issues that Games of Thrones fans had was the eighth and final season of the series veered off course too much. That was mostly because George R. R. Martin had not written the end of the series, leaving the creators to go their own way. However, House of the Dragon is now going to be changing the ending of the mainline series, leading to the complicated end that Martin has been working on for many years.

Martin was revealed to have given Ryan Condal, showrunner for House of the Dragon, the idea of the prophecy that is spoken about by King Viserys. This would mean that a Targaryen is eventually going to sit on the iron throne, uniting the seven kingdoms once and for all. However, we know at the present state, they are all meant to go to war with one another over the throne.

This could mean that Games of Thrones must go past the show’s eight seasons that have already been put together. This is wishful thinking, but there have been rumors of other spinoff shows besides House of the Dragon. We could see a continuation of some sort in the form of a series that follows Martin’s book ending.

George R. R. Martin has not yet finished the A Song of Fire and Ice book series, on which both Game of Thrones and House of the Dragon are based on. While HOTD is the prequel series that focuses on the Dance of the Dragons and the eventual downfall of House Targaryen, the new series is also setting up the lore to match the ending of how Martin sees things playing out in his books. We don’t want to get ahead of ourselves here, but could that mean another series would follow that would rectify Games of Thrones Season 8?

That is wishful thinking, but there had been many spinoff shows being worked on that would further expand the story of the mainline series. One of which is the current House of the Dragon, and there are rumors that Jon Snow is set to also receive his own series at HBO. If Snow is going to continue his own journey, we might see Martin’s true ending surface at some point in that show’s run.

Jon Snow could theoretically have his origin changed in the series to have him be discovered as a Targaryen. It wouldn’t be out of the realm of possibility for that to happen. Or perhaps Snow lives in an era where a Targaryen is sitting on the throne, maybe the House of the Dragon can set up that Daenerys is the prophecy-spoken Targaryen.

Whatever happens, it appears that Martin is working more with House of the Dragon, so that the lore can be corrected to lean into the ending of his A Song of Fire and Ice books. Fans of Game of Thrones would certainly like the last season to be redone, so it would be great to see what further expansion shows can be brought out to truly end this story. 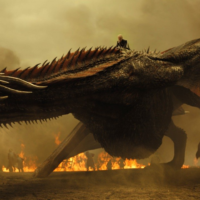