After only one season, Away, the freshman series starring Hilary Swank has been canceled by Netflix, barely a month after its debut.

Away’s cancellation comes as somewhat of a surprise, considering Netflix said the show was the second most-watched series in September, and spent 24 days in the U.S. top 10 most-watched programs. For twelve of those days, Away was at number one. Away is also ranked as the 18th most-watched show in the world on Netflix so far this year. Not to mention that starring two-time Oscar winner Hilary Swank and former Golden Globe nominee Josh Charles brought a certain level of credibility to the streaming show.

Recently, Netflix has been more careful with what they renew on the network. While Netflix still has an abundance of new series debuting every week, they seem to be canceling any show whose costs might not be worth the investment. In April, Netflix announced that it had gained 15.77 million new subscribers for the first quarter of 2020. However, at the end of March, Netflix also reported they were $14.17 billion in debt. This might explain why a sci-fi series with top talent like Hilary Swank might cost too much for the streamer at this time.

This year, Netflix has been conservative in terms of what continues on its platform. Shows like The Dark Crystal: Age of Resistance, Soundtrack, and Messiah have all recently been canceled after one season, while shows like I Am Not Okay With This and The Society were canceled, despite already receiving an order for second seasons.

Yet Netflix has also been wary of renewing shows with some major talents, so it might be likely that having big names like Hilary Swank and Josh Charles might have actually hurt the freshman series. Alison Brie and Betty Gilpin’s GLOW was originally renewed for a fourth season, but due to problems caused by the COVID-19 pandemic, the show was retroactively canceled.

Before the cancellation, it seemed as though Hilary Swank and the entire crew of Away were already thinking about the future for their show. In an interview with The Capital Times, Andrew Hinderaker said that the plan for the show was always a multi-season arc. In another interview with Esquire, showrunner Jessica Goldberg said that production-wise, Away would be extremely easy to shoot given the restraints put in place by the COVID-19 pandemic. Since the show’s second season would have featured five people on Mars, it would’ve been extremely easy to maintain safety protocols.

Goldberg also said that a second season would’ve focused on the first crew on Mars and how that journey would strain the relationships between the people on Earth and Hilary Swank and her crew on Mars. Season One ended with Hilary Swank’s Commander Emma Green and her team landing on Mars. This begins what would’ve been a 14-month mission, not including the 8-month journey back home. Again, that two-year stretch would surely cause a rift in the relationships between the people on Earth and the team on Mars.

Goldberg also said that while Hilary Swank and her team were on Mars, they would likely find microorganisms, and stated that even despite that, Away would never go in the direction of full-blown alien creatures. Goldberg continued that a theoretical second season would have followed the space agencies that helped get this team to Mars. Goldberg said that a part of what the next season would have explored would be how space travel at this point needs private sector money, such as companies like Space-X, helping bring men and women to space.

While our own review of Away said that Hilary Swank was part of a good cast, Away was only slightly better than a soap opera. However, Goldberg did say that their second season was on its way to being something extremely interesting, and the division between Mars and Earth would’ve certainly been an exciting new direction for the series. It’s a shame we’ll never get to see what a second season would’ve done for a show like Away. 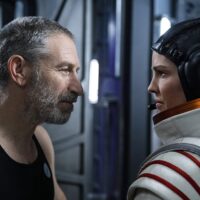