It’s been something fans have been waiting for, and we’ve finally got the info. It won’t be long until we return to The Continent. Henry Cavill and The Witcher are officially coming back to Netflix and we don’t have to wait all that much longer. The Wrap has it that the show set an official release date and it will happen this year. Fans will want to fire up the streaming app on December 17th for a return to Geralt of Rivia and the legions of evil that are possibly coming to his proverbial doorstep.

This next season of the show is set to greatly expand the world while also focusing more on the relationship between Henry Cavill as Geralt and Freya Allen’s Ciri. The two are clearly linked through destiny, tied together with possibly similar fates in this world, and there’s a growing sense that the biggest threat might come from their relationship rather than external forces. The season is set to dive into how these two will shape the future and how they are tied together for better or worse.

The most recent images of The Witcher don’t include Henry Cavill here but lend an idea of what we are getting into with this next season. We see Jaskier rocking out with a backing band and we also see Ciri involved with some of the sword training she will need for the battle ahead. Check them out.

And apparently, according to the most recent rumors, fans need not worry about any sort of timeline when it comes to Henry Cavill and The Witcher going forward. Some have it that he’s committed to five additional seasons of the series which would of course carry things considerably off into the future. That timeframe hasn’t been confirmed, but it would make sense that Netflix wanted to keep this series around as long as possible.

This latest news about The Witcher’s second season follows the show having wrapped filming up earlier in the year. The first season of The Witcher was a massive success for Netflix. Based on the video game franchise of the same name, Henry Cavill embodied every bit of what fans expected for Geralt and the series did huge numbers for the streaming platform. In their 2019 earnings report, Netflix had it that 76 million accounts tuned in for at least part of the series, making it the biggest debut on the platform.

As for Henry Cavill, this guy is just a franchise builder through and through. In addition to The Witcher which looks for all intents and purposes like it is going to be around for quite a while, he has a number of other projects at various stages of development. For starters, he’s set to continue his Netflix work with more Enola Holmes movies, starring alongside Millie Bobby Brown’s titular character on more adventures. Word has it that future movies will expand the storyline for his Sherlock Holmes role.

And then there’s the news that Henry Cavill is going to star in the Highlander reboot when that picks back up. It’s another fantasy genre win for the actor who already has it on lock in his current series. We know he can look and play the part of an epic sword-wielder, so this was a perfect fit. And there’s the confirmation of the Giant Freakin Robot exclusive that Cavill will headline and star in his own James Bond-like spy franchise. Bryan Cranston is set to join him in the movie franchise based on the novel Argylle by Ellie Conway. 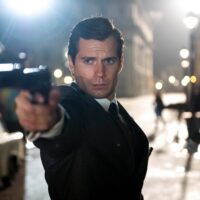