Harry Styles didn’t seem like he was headed for a huge career on the big screen just a few years ago while singing with the band One Direction and wooing teenage hearts the world over. But after a somewhat surprising and strong performance in an Academy Award-nominated film, that is all set to change. Now it looks like Styles is going to join one of the biggest studio franchises out there and is entering the Marvel Cinematic Universe. Apparently, he’s already filmed a now-not-so-secret, cameo for Marvel’s Eternals.

It isn’t totally clear what role Harry Styles will play in Eternals and considering the timing of this rumor, it doesn’t stand to be a bigger part in the film. The movie has already been cast and shot, wrapping up earlier on in 2020. Styles may have been part of a reshoot, or they could have just worked to keep his role severely under wraps for all of these months. Whatever the case, adding a big name like this, even in a smaller role, could signal other moves going forward. This has long been the case with Marvel, leaving out breadcrumbs in some movies to signal bigger things later on.

Harry Styles got his start in the boy-bad One Direction back in 2011 after appearing as a contestant and singer on the British reality show X-Factor. The group launched him into super-stardom with the band’s first four albums debuting at number one on the Billboard 200 charts, the first time that ever happened. It led to a solo singing career as well which has also been a massive success.

But the acting turn came back in 2017 when he was a somewhat surprising addition to Christopher Nolan’s Dunkirk. The World War II movie focused on the evacuation of British troops from Dunkirk, France. Styles plays a young soldier who is part of the evacuation. It wasn’t the starring role, but he proved himself more than a competent actor, able to take part and handle himself on the big screen for one of the best directors in the game.

That movie still marks the only *real* acting credit for Harry Styles when it comes to movies that have been released. That being said, he does have some other things in the works other than just this supposed Eternals rumor. He’s slated to star in Olivia Wilde’s thriller Don’t Worry Darling opposite Florence Pugh. He took over the role from Shia LaBeouf who was fired by Wilde. Styles plays the husband with a dark secret, possibly tied to a creepy cult leader played by Chris Pines.

As for Eternals, Styles role here is anyone’s guess. Filming for the movie wrapped almost a year ago now with the release date pushed back until November of this year. It’s part of Marvel’s Phase Four and will tell the story of the titular group of god-like warriors who’ve been around for millennia. The cast is huge with Angelina Jolie, Kumail Nanjiani, Kit Harrington, and Salma Hayek among others all taking their first roles in the Marvel Universe. The story and filming are still very much shrouded in mystery with barely any hints about the film at all. That’s probably one of the reasons the Styles’ piece was able to stay out of the rumor mill until now.

Besides Don’t Worry Darling, Harry Styles is also rumored for a part in Faster, Cheaper, Better from Velvet Buzzsaw’s Dan Gilroy. Though he started on stage with the silky-smooth voice, it sure looks like Styles will continue to make a mark on the big screen as well. 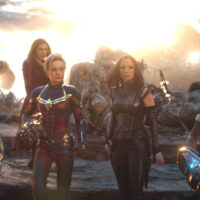