EXO-6's Mirror Universe Sulu is quite possibly the greatest Star Trek collectible in this or any other galaxy.

If you are in the business of making Star Trek collectibles, you may very well want to close up shop because it’s quite possible the peak of greatness in the field has been reached. TrekMovie recently reviewed EXO-6’s Mirror Sulu 1:6 Scale figure, and it is absolutely stunning. As you can see in the video above, the figure recreates George Takei‘s look as an alternate universe version of Hikaru Sulu in the 1967 episode “Mirror, Mirror.”

The classic episode sees Captain Kirk, Lt. Uhura, Scotty, and Bones transported to what has since become known as the Mirror Universe, where instead of the Federation there’s the Terran Empire. Just as the Empire’s ideals are much less utopian than those of the Federation, ascension through its version of Starfleet is achieved through subterfuge and violence. Its version of Sulu is fittingly sadistic and petty, and his look is captured perfectly in EXO-6’s Star Trek collectible.

The Star Trek collectible is actually the second of EXO-6’s Mirror Universe series; the first being their figure of the Mirror Spock. Along with Sulu’s Starfleet uniform the figure comes with a total of eight hands the owner can mix and match, two different phasers equipped with magnets to allow them to be moved around, a dagger and sheath, communicator, a hexagonal display base, and an informational card with room for an autograph. EXO-6‘s Mirror Sulu costs $198 plus shipping, and looks worth every penny.

The Sulu figure isn’t the only Star Trek collectible EXO-6 has offered fans. Exploring their site will reveal equally impressive figures from most of Trek’s live-action series–along with some of the films–with the most recently introduced franchise characters represented being Doug Jones’s Saru and Sonequa Martin-Green’s Michael Burnham from Star Trek: Discovery.

It also doesn’t necessarily seem like a good idea to wait to order from EXO-6. They have a number of Star Trek collectibles available for pre-order including Captain Picard’s transformation into Locutus of Borg and Captain Jonathan Archer of Star Trek: Enterprise. However, pre-orders for their upcoming Benjamin Sisko figure–from Star Trek: Deep Space Nine–have been stopped.

The Mirror Universe story the Sulu Star Trek collectible is based on proved to be one of the most influential episodes in the franchise. Twenty-seven years after “Mirror, Mirror” premiered, Deep Space Nine returned to the flipside narrative in its Season 2 episode “Crossover,” in which we discover the Terran Empire has been destroyed and its people have been turned into slaves. The Mirror Universe became a recurring stop for DS9 and was featured in a memorable two-parter in the final season of Enterprise.

The locale was never more relevant in a Trek series than it would become to the first season of Discovery. The crew of the titular ship would not only find themselves lost in the darker reality, but would discover their Captain had been a native of the place the entire time. 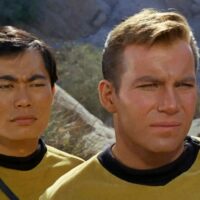