See The Amazing New Look For The Flash’s Grant Gustin

CW’s The Flash is premiering more episodes for its eighth season on March 9, and a new poster for the main character was just released. Grant Gustin has been playing the role of Barry Allen, also known as The Flash. The character is known for wearing a very red suit, which definitely makes this superhero stand out. The Flash is a DC-made series for the CW and has been airing for years, with a close following from fans of the show and also the character. DC posted a tweet on their main Twitter account to showcase the new look for The Flash, and it is definitely a very flashy updated appearance.

On February 25th, DC Comics uploaded a photo on Twitter to show off The Flash’s new look for the new episodes. The photo shows Grant Gustin wearing the bright red suit, with the iconic yellow lightning bolt in the middle. On the poster, there is a quote meant to add emphasis to the character of The Flash. The quote states, “Life in the Flash Lane.” This definitely adds a little humor to the character and the overall series. DC also announced when the series will start airing again along with the eye-catching photo. “Barry is faster than ever. New episodes of @CW_TheFlash return Wednesday, March 9 on the CW. #TheFlash.” See the post below with the lightning rippling throughout:

Alongside Grant Gustin, the series also stars Candice Patton, Danielle Panabaker, and Carlos Valdes. The show first premiered back in 2014, and it has been in the talks that there could also be a ninth season. While that news is still waiting to be officially confirmed, The Flash actor Grant Gustin has apparently signed another contract to appear as the character for another season. According to Deadline, sources said that the contract Gustin signed would give him around $200,000 per episode, which will definitely give the actor a decent paycheck at the end of the project. Since the actor has signed a contract, then it seems a ninth season is potentially in the works very soon.

The eighth season will premiere its next episode on March 9th, and the title of the episode is, “Impulsive Excessive Disorder”. Grant Gustin has been The Flash for a number of years, and the show itself has been running for quite some time, which shows that the series is well made and keeps audiences entertained. On IMDB, The Flash has a score of 7.6. Gustin has a long line of work behind him, and has appeared on other successful shows, such as Arrow, which also aired on The CW. Arrow was also based on the DC Comics character, Green Arrow. The actor also appeared on the hit show, Glee.

The CW and DC Comics seemed to be gearing up fans and audiences for the continuation of the eighth season, and the flashy poster is definitely exciting. The season might end on a cliffhanger, especially since it seems the main actor for The Flash, Grant Gustin, has signed another year-long contract. 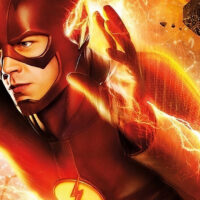