Star Wars fans are no strangers to revisionism. The original trilogy of a galaxy far, far away has been edited and re-edited and converted and altered for as long as it has existed (seriously: if you think the first movie was called A New Hope when it was released, you’ve got another thing coming). However, a recent bit of historical revisionism might actually cause a bigger than usual fan uprising because it concerns one of the most iconic elements of the original trilogy: the gold bikini worn by Princess Leia in Return of the Jedi. While the scenes of Carrie Fisher as a gold bikini-clad Princess Leia as Jabba the Hutt’s captive are not being deleted from the movie (yet), it looks like merchandise is being modified to remove the image.

As reported by Bounding into Comics, Dennis Pellegrom (the founder of StarWarsInterviews.com) noticed that licensed Star Wars apparel from the fashion company RSVLTS used the format from one of the iconic Return of the Jedi posters, originally designed by  Japanese artist Kazuhiko Sano. However, while the gold bikini-clad Princess Leia is one of the focuses of the original poster, the clothing appears to have altered the image. Here is the original poster, with gold bikini Princess Leia:

And here is a close-up of one of the RSVLTS items:

Gold bikini Princess Leia appears to have been replaced with an image of Carrie Fisher from The Empire Strikes Back. In this, she is wearing the thermal outfit she wears at the beginning of the film on the ice planet Hoth. Interestingly, while the gold bikini Princess Leia has been replaced, the clothing does include an image from one of the posters from A New Hope, which has also been criticized as overly sexualizing the character. Here is the close-up:

Neither Lucasfilm nor RSVLTS seems to have yet commented on the decision behind excluding that outfit from the imagery on the line of clothing. The outfit worn by Carrie Fisher in Return of the Jedi has long been one of the more controversial elements of the original trilogy. Carrie Fisher herself was highly critical of the imagery of the gold bikini version of Princess Leia. Reportedly, she told Star Wars newcomer Daisy Ridley “Don’t be a slave like I was… You keep fighting against that slave outfit,” and repeatedly referred to the effect the outfit had on her image as a sex symbol. Apparently, it was also extremely uncomfortable.

There is no current indication that Lucasfilm (or parent company Disney) has plans to edit the film version of Return of the Jedi to replace the gold bikini worn by Princess Leia with a less-revealing outfit or Christopher Plummer. Of all things that diehard Star Wars fans might care about, RSVLTS might have hit upon one of the more serious ones (well, aside from all the other ones). We will just have to see if the clothing is redesigned to include that beloved outfit or if they are going to stick with cold weather Princess Leia. 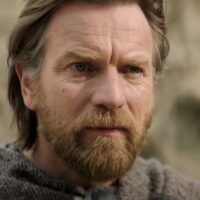