Gina Carano has had a number of different, sometimes controversial, stances of late. And her views and intermittent message through her Twitter account have served to fire up some Star Wars fans into thinking she should no longer be in her current job. But for all the backlash she’s received over the last couple of months, Carano appears still fully employed with Disney. Considering how quickly actors and actresses can get canceled these days, it’s been somewhat surprising the studio hasn’t had a public response. And we now might know why Gina Carano isn’t on the immediate chopping block.

According to “Pirates and Princesses” there are plenty of folks inside the Disney world who would happily have Gina Carano canned from her role as Cara Dune on The Mandalorian. But there’s one person involved with the show who has a lot of sway and doesn’t lean any which way politically. And that guy is Jon Favreau who just happens to be the creator and showrunner. In Carano’s case, if there was someone to be helming things who isn’t going to care about an actress’s viewpoints, it appears Favreau is that guy. He is apolitical and doesn’t want the show’s hiring or firing decisions to stem from that talent’s off-air opinions.

Outside of Favreau’s apparent dismissal of any Gina Carano controversy related to her employment, Disney is in a precarious spot regarding her character as it is. To outright fire her leading into Season 3 of The Mandalorian would upend a couple of different storylines. And it would remove an excellent character who brings a massive amount of life to the screen in a powerful and confident female role. No matter how you feel about her politics, there’s no doubt Carano has crushed as Dune on the show.

The controversy involving Gina Carano stems from her social media involvement over the last month-plus, starting around the U.S. Presidential election. It was then that she tweeted implying the election results were fraudulent as well as some ideas about a mask-wearing culture. These tweets landed like a lead weight for many The Mandalorian fans and calls rang for her ouster. But Carano didn’t back down off her stances at all, instead essentially doubling down and taking a devil-may-care attitude toward those who wanted her fired. She seems to like getting people worked up.

Her co-star Pedro Pascal came out in support of Gina Carano as well, saying he backed her freedom to say what she wanted. And of course, during this time, executives from Disney have been noticeably silent on the matter. This is in contrast to how they’ve handled a somewhat similar situation involving Black Panther’s Letitia Wright. Now at least we know why.

There’s still quite some time to see movement on this issue involving Gina Carano. The Mandalorian Season 3 isn’t set to hit Disney+ until the end of 2021 at the earliest. That means there’s either a runway for Carano to make amends/ apologize (unlikely) or the studio to possibly put enough pressure on Favreau to have him change his stance. I very much doubt we’ve heard the last of this, especially with Carano remaining steadfast in her current views. 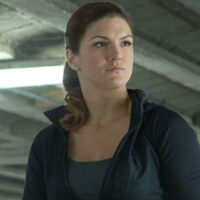