Gerard Butler: How He Went From Lawyer To Leading Man

If you think of Gerard Butler and instantly call to King Leonidas in 2007’s 300, it makes a lot of sense. It’s probably the defining role for an actor who’s been in the game for the last 20 or so years. His large-pectoral, cape-wearing, romp through the Battle of Thermopylae, directed by Zach Snyder, was a visually different, and extremely bloody, way of producing movies that for sure put Butler more “on the scene” in terms of Hollywood leading-man status.

But that wasn’t the beginning of his career nor was it the culmination. He’s also done much since (for better or worse). The actor has been in a wide range of films and also got his start in something of a nonconventional way when it comes to acting.

Before he hit the screen, Gerard Butler grew up mostly in private schools raised by a single mother because his father was mostly out of the picture. Butler eventually pursued a career in law in Scotland and even became a certified attorney as a lawyer in Glasgow. But like most lawyers (presumably) he hated the gig and couldn’t wait to get out.

In a nearly 180 pivot from the suit-and-tie-wearing, legal brief-pushing world of law, he decided to give a stab at acting. He started on the stage in a number of different plays and eventually was able to grow that into a full-time gig. Leaving the law proved to be the correct choice.

Gerard Butler had a few bit parts early on in flicks like Mrs. Brown and the Pierce Brosnan-as-James Bond film Tomorrow Never Dies. Neither rated as big parts for the actor.

His big break came in 2000’s, idioticly-named, Dracula 2000 in which Gerard Butler plays the titular, blood-sucking lead character. The flick sucked with critics at only 17% on Rotten Tomatoes and managed to lose something like $7 million at the box office ($54 million in, $47 million back) but still seemed to “launch” Butler’s career.

It was after Dracula 2000 (I get a chuckle just typing that title again) that Gerard Butler became something of a mini-leading man. Other big budget films came down the pike with parts in Reign of Fire with Matthew McConaughey and Christian Bale, Lara Croft Tomb Raider with Angelina Jolie and Timeline with Paul Walker. As will become something of a theme with Butler’s career, all of these movies pretty much bombed with critics at 42%, 25% and 11% respectively on Rotten Tomatoes.

Phantom of the Opera

Gerard Butler’s next leading role came in 2004’s Phantom of the Opera directed by Joel Schumaker. Butler plays the half-masked man and to his credit, dude really does have some pipes. It was, presumably, his experience with his early band Speed of Life that prepared him for the role of an opera singer.

So while yes, Gerard Butler can belt out some tunes, the movie also didn’t do all that well on the critical side (33%) even if it did make some bucks at the box office ($154 million). To his credit, Butler’s performance is a little stiff but mostly fine; it’s the script and direction that do him more than a little dirty in this one.

Luckily, Zack Snyder and company were able to see through some of the Opera issues and take Gerard Butler on as the leading man in the movie 300. This was a pretty daring movie for the time all things considered and took some chances with the sepia-toned retelling of the Battle of Thermopylae. It paid off and mostly won over critics (60%) and murdered the box office like the Persians over the Greeks with about $460 million worldwide.

300 bought Butler, a Scot, so much Greek goodwill that dude is still making speeches in Sparta under the statue of Leonidas even as recently as last week when he was asked to carry the Olympic torch through the area…

It really seemed like this movie, even more than some of his previous work would really launch Gerard Butler into Hollywood superstardom. He had the macho bravado, the upper body strength and even the moderate stoicism that you need in a leading man.

The problem with becoming a leading man is that the industry wants to see you playing a “range” of parts and roles. This is, presumably, why a movie like P.S. I Love You came along. In it Gerard Butler plays the deceased husband of Hillary Swank who leaves her a bunch of “bucket list” stuff to do after he’s left this mortal coil. It’s one of those movies that sounds kind of okay as a concept but as a movie ended up being pretty terrible. It was a movie that, even though he was dead, still moved Gerard Butler away from the romantic roles. He didn’t do much of anything in this genre after this film.

Also in this timeframe, Gerard Butler starred in Law Abiding Citizen, a crime thriller alongside Jamie Foxx. He plays a manipulating killer looking to avenge his wife and child’s death. The F. Gary Gary (Friday, Straight Outta Compton, Fate of the Furious) directed movie definitely deserved better from critics, rating at only 26% on the Tomatometer. Butler is really good in this role, a hard-nosed dude at his wit’s end who’s pulling all the strings in a complicated situation. Is it a perfect movie? No, but it accomplishes with what it sets out to do.

Gerard Butler tried a couple of more non-crime/action films in Chasing Mavericks where he catches some waves (oops) and A Family Man where he’s struggling to balance a career and a terminally ill son. Again, neither of these movie’s failings seem like Butler is at the root of the problem, but they continue to lend credence to the idea that he might not have “range”.

And finally, Machine Gun Preacher tried to take a geopolitical path to an action movie outcome with a missionary dude raging through Africa to save a bunch of refuge kids. A killer title, decent premise, and strong performance weren’t enough to really help it with critics which, again, seems like something of a theme for Gerard Butler’s career.

From a box office perspective, Gerard Butler has found something of a groove with the “… Has Fallen” franchise. Starting with Olympus Has Fallen, Butler plays Secret Service Agent Mike Banning who becomes a one-man, John McClane-like saviour fighting a group of terrorists who’ve come to take over the White House. Of course he dispatches them all systematically and the movies did a very popcorn-like $170 million on a $70 million budget.

That led to subsequent terrorist takedowns in London Has Fallen in which Gerard Butler takes his special skills across the pond and then Angel Has Fallen which takes his bad-guy killing on the lam.

Are these great films? No, of course not. But they are eminently watchable and when Gerard Butler has set out to do these kinds of flicks they definitely land with a certain audience. They’ll never make hay with critics because they are, at their core, silly but sometimes silly action movies are just the thing we need. In this way, I very much appreciate much of Butler’s catalog.

A Man Among Dragons

I don’t often lend too much credence to voiceover work, but Butler has done well as Stoick in the How to Train Your Dragon franchise. I told you the man does have pipes and his gruff brogue plays well in the role. From an animation perspective, this is really Gerard Butler’s only role, but it definitely works.

Most of Butler’s other work has been characterized by little-regarded, often forgettable films. Den of Thieves is a completely nonsensical bank heist film in which Gerard Butler plays a tattooed rogue cop. I kind of loved it but only in a “what the hell is going on here?” way that made it more funny than suspenseful. This was in the same timeframe as Geostorm in which he tries to tackle the climate and Hunter Killer where he takes on the sub life. All of them are completely ridiculous.

Gerard Butler has had an interesting career in that his work on film always seems pretty solid but the films seem to fall well short of expectations. His average Rotten Tomatoes score is 34% in movies he’s “lead” or had a major role in.  It could be something in the way he chooses his films. Or maybe it does imply a lack of “range”. That being said, the unmarried actor seems committed to the craft and I, for one, am damn glad Gerard Butler left that legal life 20+ years ago. 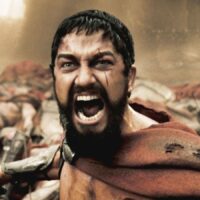