Reality competitions used to be simple. Belt your heart out, rock a stunning dress, dance your way to the finale, do magic tricks no one else can decrypt, manage your team to victory, cook amazing dishes, and survive a jungle gym without as much as a bruise. Peacock’s next great show takes a page out of Joe Rogan’s handbook with Frogger, an adaptation of the 1981 arcade classic that requires contestants to channel their inner daredevil and navigate an obstacle course filled with snapping gators, waiting hippos, speeding cars, and various other hazards. The winner, dubbed “America’s finest Frogger,” will be rewarded a modest $100,000 for their efforts.

The mechanics of the game are horrifically source-accurate, a Deadline report confirms, and immediately begs the question: is this show truly as perilous as it appears, with participants forced to make hair-raising escapes with their life, or are producers simply pulling our leg? Whichever the case, Frogger demands only the toughest, most athletic contenders, as the game will test one’s smarts, agility, tactical ability, endurance, guts, and brute strength. Forget Mouse Trap; Frogger is poised to become the challenge of a lifetime. Definitely not for the faint of heart.

NBCUniversal rubber-stamped Frogger in February. The inaugural season will have 13 hour-long episodes. Tryouts will likely mimic the audition process for equally grueling shows like American Ninja Warrior, Naked and Afraid, and Fear Factor, evaluating not only an applicant’s capacity for advanced acrobatics and manual dexterity, but also their current state of health and comprehensive medical history. Expect Parkour practitioners, bodybuilders, and accomplished outdoorsmen to dominate Frogger.

The original 1981 Frogger was an arcade game developed by Konami and SEGA. Given its contemporaries at the time, the mechanics are understandably rudimentary and easy to pick up. Players are tasked with crossing two horizontal paths: a busy road packed with bustling traffic and a treacherous river inhabited by alligators, turtles, snakes, otters, and the occasional log. The goal of the game is to get as many frogs to their homes on the other end of the screen. Depending on the game’s settings, challengers have up to seven frogs, minimum of three, with which to navigate the field. Logs, turtles, and alligators may be used as makeshift platforms.

Frogger is widely noted for being the one arcade game with “the most ways to die.” Frogs can drown when perched atop a turtle submerging into the river, be eaten when hopping into an alligator’s open jaws, be run over by a whizzing vehicle, be ambushed by a waiting gator inside a “frog home,” be bitten by snakes and otters, or perish by simply making the wrong jump at exactly the wrong time.

Players can also lose Frogger when the timer goes to zero. Every good move earns the player points, like picking up a female frog on the way, but the hazards are just as numerous. Imagine playing this in the real world, with real-life deathtraps and living river monsters. The premise is certainly interesting for a reality TV show, but once again raises the issue of safety; we’re all for magnificent displays of courage and athleticism, but adding man-eating wildlife to the mix seems a step too far. 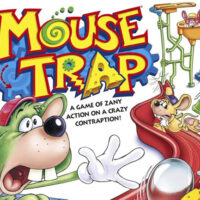