See The First Look At Florence Pugh In Dune 2

After impressing audiences with her roles in Midsommar and Black Widow, Florence Pugh has become one of the most wanted talents in Hollywood. With Oppenheimer wrapping production in May, now the Marvel star is on her way across the universe for Denis Villeneuve’s Dune: Part Two. Pugh is playing Princess Irulan Corrino in the sci-fi epic, and we’ve got an image of her from the set of the film.

Though Deadline reports principal photography isn’t set to begin in Budapest, Hungary until later this week, pre-shooting has begun at the Brion Tomb in Altivole, Italy. The image of Florence Pugh is from the Brion Tomb, according to Movie Web. The image surfaced on the Twitter feed of the fan account Florence Pugh Daily. You can see the image below.

The photo is pretty blurry, but clear enough that Florence Pugh can be made out. It’s also clear she’s in some kind of costume, though it doesn’t look quite elaborate enough to be the kind of garb Irulan would appear in during official functions. A number of fans responding to the tweet noticed that her outfit looked similar to that of a royal character from a much different story — the Childlike Empress (Tami Stronach) from 1984’s The NeverEnding Story. You can see some of those responses below.

Dune: Part Two and its predecessor are based on the 1965 novel Dune by Frank Herbert and, as Movie Web notes, the character Florence Pugh plays isn’t a major player until later in the book series. However, it seems likely Villeneuve wouldn’t bother hiring Pugh unless the character’s role had been expanded. Virginia Madsen played Princess Irulan in David Lynch’s 1984 adaptation. Though she narrates parts of the earlier film, plot-wise she doesn’t factor into it much.

The addition of Florence Pugh to the cast is a jewel in an already impressive crown. Members of the all star cast expected to return from the first film include Timothee Chalamet, Zendaya, Josh Brolin, Dave Bautista, Stellan Skarsgård, Javier Bardem, and Rebecca Ferguson. Now along with Pugh; Dune: Part Two will see Christopher Walken appear as Emperor Shaddam IV, Léa Seydoux as Lady Margot, and Austin Butler as the Harkonnen known as Feyd-Rautha — the part famously played by Sting in Lynch’s 1984 adaptation.

Florence Pugh recently caused quite a stir online about what she was wearing, and it had nothing to do with her looking like a character from Dune: Part Two or The NeverEnding Story. Pugh was one of many celebrities who showed up for the Valentino couture show in Rome, but unlike the other stars she showed up in a see-through dress with her breasts fully visible. The actress seemed less than phased by the negative comments fired at her online — many of which were from men insulting her physique — and responded fiercely.

We’ll next see Florence Pugh on the big screen in September alongside Harry Styles, Chris Pine, Olivia Wilde, Gemma Chan, KiKi Lane, and Nick Kroll in the psychological thriller Don’t Worry Darling. In December she’ll voice a much more hardcore Goldilocks than we’re used to in the animated sequel Puss in Boots: The Last Wish. 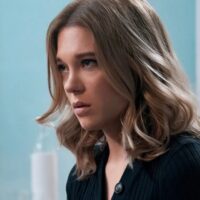