Released in the last weekend of April, Extraction arrived on Netflix in a time when movie theaters aren’t open and all the summer movies are cancelled. So, audiences starved for a blockbuster watched it in huge, huge numbers. Extraction has been a massive hit for Netflix so they’re already working on the sequel. Extraction 2 is happening.

They recently offered an update on when Extraction 2 will actually happen. Here’s what the Russos had to say about where they’re at on the sequel…

“Yeah we’re still working on two. We’re in the script phase right now but we’re hoping to shoot that sometime next year. And then you know, say I’m super excited, Hemsworth’s super excited, Netflix is excited so it’s really just a function of getting the script done.“

Biggest Netflix Movie Of All Time

The numbers are in and Netflix has just revealed that the original Extraction is now their most watch movie of all time. Star Chris Hemsworth responded with this message to his fans…

“Can’t thank everyone enough for the continued support of Extraction! Still going strong and sitting at number 1 biggest film ever for Netflix. You guys are the greatest!“

The Plot Of Extraction 2

The plot of Extraction 2 has already been planned out by the Russo brothers team. Rumor has it those plans involve a time jump in which the henchman kid who was so much trouble grows up and is now more ready to take on Chris Hemsworth’s hero character.

Of course the biggest priority for Extraction 2 is bringing back Chris Hemsworth. If you’ve seen Extraction then you know it ends on a sort of ambiguous note and it’s not entirely clear if his character, Tyler Rake, actually survives.

That problem could be solved with some time jumps. The movie’s director Sam Hargrave had this to say about their ideas for Extraction 2: “…there have been discussions of different storylines that could take place in different times – both forward in time and backwards in time.”

Ideally though they won’t go the prequel route. Since the ending is ambiguous I’d rather see them come up with some ridiculous excuse for Rake’s survival in Extraction 2. Move the story forward, please.

As for whether Hemsworth would be willing to come back for Extraction 2… consider his movie resume. Outside of the Avengers, Extraction has been his best reviewed movie. In our Extraction review we said of Hemsworth’s performance, “…the fit is natural for Hemsworth and it’s easy to believe him in the role.”

When all is said and done, Extraction will also probably be Hemsworth’s most watched non-Avengers movie. Until Extraction it wasn’t really certain whether he’d actually have a career as a movie star outside of playing Thor. He’s tried different things like Snow White And The Huntsman, but none of it really worked. If Hemsworth has had any success outside of the Avengers it’s mostly been in great comedic supporting roles in movies like the Ghostbusters reboot.

But now he’s got something going as a legit leading man. He’d be insane not to run with it right into Extraction 2. Given that and Chris Hemsworth’s relationship with the Russos, he should be a lock to return for Extraction 2.

Another Chris For Extraction 2

Rumor has it that one of the Russo Brothers ideas for the sequel involves having Chris Hemsworth’s character team up with another Avengers actor. This time the Russos are hoping to bring in Chris Evans.

Oscar Isaac As A Villain?

One of the more interesting rumors swirling around the very very early development of Extraction 2 is who they’re looking at to play the villain. In the first movie the bad guy was a sort of nondescript, child-murdering Indian gangster. But if they’re teaming up Chris Evans with Chris Hemsworth, you’re going to need someone special to be worthy of the combined power of two Chrises.

You’re probably thinking Thanos, but that would be a little too fantastical for this franchise. So the biggest name being rumored for the job of playing the sequels antagonist is Oscar Isaac.

Isaac is currently best known for his work in the Star Wars Skywalker trilogy. But he’s also a respected and really good actor. Having the cast members from the two biggest franchises of the decade collide and battle it out in Extraction 2 could be a lot of fun. 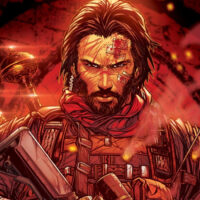