Netflix has been working on expanding its anime-influenced offerings on the streaming service. They’ve also been working on building out their franchises. In 2019, audiences got their first season of the comic-book adaptation for Umbrella Academy, and they loved it. During its first month, 45 million households tuned in to the live-action series, making it one of Netflix’s biggest releases that year. Right now, the streaming service has promised that Umbrella Academy season 3 is on the way and we’ve even learned that a fourth season can be expected as well. Now, Netflix is ready to take its commitment one step further. Thanks to work from one of our trusted and proven inside sources, we’ve exclusively learned that an Umbrella Academy anime project is in the works at Netflix.

That’s right, Umbrella Academy will soon be a comic book, a live-action series, and an anime. Fans of the Hargreeves siblings will have many different iterations they can look to for stories following their characters. While we know that Netflix is in active development on the anime project, we were unable to learn how far along they are in the project. It’s unknown if they’ve hired animators for it yet. It would be great to know if they’ll be hiring one of the companies that have previously worked on one of their other anime-influenced series or if they’re working with someone new.

Powerhouse Animation Studios, the company that worked on Castlevania on Netflix, has a first-look deal with the streaming service for their future animated projects, to that seems like a strong possibility. The animation studio also recently worked on Masters of the Universe: Revelation, the new He-Man series, for Netflix. This may give us some hints on what we can expect an anime-styled Umbrella Academy series to look like.

Fans of the live-action Umbrella Academy may be wondering if anyone from the original Netflix series may do voice-work on the anime. This is an interesting question since the new series will also be on Netflix. It seems most likely that they’ll keep the two projects separate. It may be confusing to have Elliot Page voice Vanya in two different projects when the characters will be different in each story.

It’s also unknown how different the anime will be from the live-action series. Netflix isn’t likely to tell the exact same story from the live-action series. It seems more likely that the anime may choose a new central character and take a different approach to the universe that was first set up in the Gerard Way comic series, although that’s only speculation. How Netflix will approach having two Umbrella Academy series on their streaming service at the same time is unknown.

This marks a new opportunity for Netflix and one that’s pretty exciting to see happening. Just recently, the streaming service released their trailer for their upcoming animated movie for The Witcher. While many believe that Netflix is expanding their animated offerings as a way to challenge Disney+, and that may be true, they are definitely working on projects that appeal to a different audience. 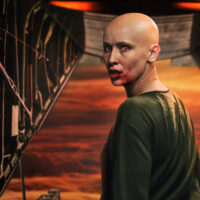