Star Trek: Strange New Worlds is promising to be a return to the kind of episodic adventure that made the Star Trek franchise the behemoth of science fiction it is today. The show will be following the exploits of the USS Enterprise during its time under the command of Captain Christopher Pike. While we know that the crew will also consist of Una, the first officer, and everyone’s favorite Vulcan, Spock. However, we have yet to learn a whole lot about the rest of the crew. Fans have been eager to discover the new characters that will headline this iteration of the series. And it just so happens that Giant Freakin Robot has gotten a hold of some exclusive information that reveals some major elements to one of the new crew members.

According to our trusted inside source – the same one that has provided Giant Freakin Robot with multiple confirmed exclusive scoops that have included the reveal that Bruce Wayne’s parents will be evil in Robert Pattinson’s The Batman, Bruce Campbell will appear for a cameo in Doctor Strange in the Multiverse of Madness, and that Monica Rambeau will be one of the main characters in the upcoming Disney+ series Secret Invasion – Star Trek: Strange New Worlds will be introducing a non-binary member to the crew of the USS Enterprise. The crew member’s name is Angel and it looks like they might end up being a source of intrigue across the first season of the show. The casting info we have received says that Angel is originally going to be seen as very outwardly fun and charismatic, but that it will be revealed they are hiding a very different personality. The info we got also says that the studio is encouraging non-binary actors to audition for the role.

Obviously, we need more context with this, but the idea of Star Trek: Strange New Worlds giving a non-binary character the spotlight is encouraging for diversity. However, the fact that this information makes it sound like Angel will be a duplicitous character and one the audience might not be able to trust feels like a “one step forward, two steps back” approach to representation. Making a non-binary character secretive and untrustworthy could reinforce negative stereotypes and feelings about LGBTQ+ persons. But, as we said, we need much more context to see exactly what the filmmakers have in store for this new addition to the Star Trek: Strange New Worlds ensemble.

Star Trek: Discovery already broke ground by introducing the first trans and non-binary characters into the franchise. It will be intriguing to see just what Star Trek: Strange New Worlds has in store for Angel and how much time will be devoted to making their character a well-rounded and complex individual. Hopefully, we can see a multi-faceted character in Angel and this can be a great step forward in seeing more LGBTQ+ characters show up in major properties like Star Trek. We will also be interested to see who else will be joining the crew of Christopher Pike’s Enterprise. 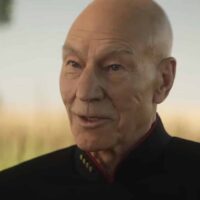 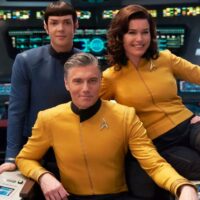 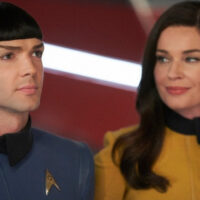