Gwyneth Paltrow might have seemed like she was done with the Marvel Cinematic Universe. With the final moments of Avengers: Endgame seeming to offer an ending for the character of Pepper Potts, many fans have assumed that the actress had made her final appearance in the superhero franchise. And even though she had made some statements about a possible return, it was always under the guise of a very small role that would essentially act as a cameo. As far as playing a major part or returning in her Rescue armor, it has always seemed like she was never going to commit to such a level of involvement in the future of the Marvel Cinematic Universe.

Well, Giant Freakin Robot has reached out to our trusted and proven insider source and we have obtained exclusive information that says Gwyneth Paltrow will be back as Pepper Potts in a big way. Our informant says that the actress is currently in talks with Marvel Studios to return in her Rescue armor and will be fighting some enemy in her return appearance. From what we have heard, the plan is to have Pepper Potts show up in a cameo. This would then act as an establishment for a much larger role in another project. Our source says the current talks between Gwyneth Paltrow and Marvel has to do with where she will be making her appearance.

The project we are hearing is currently being proposed would be Armor Wars, the Disney+ series set to star Don Cheadle. Not only does that make sense for the character, but it would be great to see Gwyneth Paltrow and Don Cheadle act together as two of Tony Stark’s closest companions. However, we also wonder if Pepper Potts could end up playing a crucial role in Ironheart, another upcoming Disney+ series in the Marvel Cinematic Universe. That show will focus on Riri Williams, a young woman who creates her own suit of armor and becomes a successor to Iron Man. It would also make sense for Pepper Potts to show up in that series as either a mentor figure or simply as a way to help pass the torch from Tony to Riri.

And honestly, it sounds like this could be the most likely structure for Gwyneth Paltrow to return to the Marvel Cinematic Universe. It’s looking like Ironheart might be premiering before Armor Wars, so our intel is looking to line up perfectly with this release schedule. Pepper Potts would make her cameo return in Ironheart which would set her up for a major role in Armor Wars. Until we hear otherwise, that seems to be the most likely plan for this reintroduction of Pepper Potts. Plus, seeing her and Riri suited up and fighting together feels like the kind of exciting moment Marvel fans would love to see as a surprise.

We will be keeping our eyes and ears open for any more specifics we can find about Gwyneth Paltrow coming back to the Marvel Cinematic Universe, but we can definitely state that she is coming back and will be trading blows with some villains. 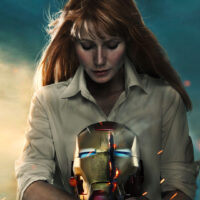