Batman Beyond is a movie that people have been waiting for long before any real news came of it happening. In early 2019, fans expected an animated feature film. In fact, it was rumored that DC was looking for an Asian-American voice actor to take up the role at the time. In the years since then, a lot has changed at Warner Bros and in Hollywood in general. Now, they’re developing a live-action film, and while they have their Bruce Wayne in Michael Keaton, the role of Terry McGinnis is up for grabs. The internet has often suggested Timothee Chalamet for the role, but that doesn’t appear to be in store. One of our trusted and proven inside sources has learned that Warner Bros wants a person of color to play Terry McGinnis in their upcoming Batman Beyond project.

From what our source was able to share, it sounds like the studio’s plan at this point includes casting an actor of color, but from what we’ve learned, it doesn’t seem that they are set on any particular background. This leaves the casting call sheet for Batman Beyond very open. It does exclude Timothee Chalamet from the role, unless they have a major change of heart.

Batman Beyond was an animated series starting in 1999. In the years since, it’s also been a story we’ve seen covered in DC comics. In those iterations, Terry McGinnis’s racial background has actually been a source of debate among audiences. While many have looked at him and assumed he was white, and what is known of his background makes him seem white, some have made a strong case that Terry McGinnis is Asian-American. While that would seem like the angle the studio may go with casting, we can only guess on that part. At this point, their casting decision has simply been to cast a person of color for Terry McGinnis, which will help diversify some of DC’s lead roles.

The big question being: who could take up the Batman Beyond role? In a since-deleted tweet from 2020, Ross Butler once put out there that he would like the role. While Butler is a little over 30 years old, he looks young enough to play a teenager and has a biracial background, but he is also already an actor for DC, playing Super Hero Eugene in Shazam!.

Since Terry McGinnis is a teenager, they may hire an actor in their 20s, since teen actors are harder to find. If they want to hire an established face in the industry, that’s a more shallow pool. This is why names like Timothee Chalamet and Tom Holland, who are in their mid-20s, come up so often for major roles. There aren’t as many actors in that age range that have been so established, and while roles for young actors of color seem to be coming up more these days, the opportunities are still not as plentiful to help them become established.

Still, there are faces out there if DC wants an actor with some industry experience for the Batman Beyond role. Gregory Diaz IV is an actual teenager, and while his character in In the Heights was largely upbeat for a future Batman, he was compelling as an actor. (Of note, he was in that film with Leslie Grace, who was recently cast as Batgirl for DC.) Miles Brown has a surprising number of acting credits in his history for a teenager. Again, mostly in roles that seem upbeat for a new Batman in a darker future Gotham, but the same can be said of Tom Holland or Timothee Chalamet.

Since they have Michael Keaton on board as Bruce Wayne, which offers some established star power, it may be that casting an unknown face for Terry McGinnis is the best opportunity. Hopefully, they’ll find someone for Terry McGinnis soon and the long-awaited arrival of a new Batman Beyond project will happen as soon as possible. 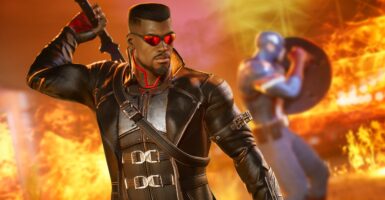