In the tradition of such beloved franchises as Highlander, Terminator, and X-Men; the Aliens franchise has apparently decided to scrub itself clean of some of its canon. Our trusted and proven sources tell us that the character of Newt–played by Carrie Henn in 1986’s Aliens–will be the heroic lead of an upcoming film sequel. Because the character was killed off-screen in 1992’s Alien 3, that film will no longer be considered part of the Aliens canon.

We don’t know yet who, if anyone, the writers of the Aliens sequel have in mind to play Newt, though in most likelihood it won’t be Carrie Henn. In 2016, Henn told Uproxx that by the time her character was killed off in Alien 3–while she would have returned to the role if asked–she’d already decided she wanted to leave acting behind to become a teacher. She also said that by 1992, she was too old to play Newt.

It’s purely speculation, but we can’t help but think that the Aliens sequel makers would do well to consider recruiting Anya Taylor-Joy as a grown-up Newt. She certainly looks like she could be the LV-426 survivor all grown up, and Taylor-Joy has proven her range and talent as an actress. Among other things, she’ll be making her action lead debut in 2024 in the Mad Max spinoff Furiosa.

In case you’re not up to speed on why resurrecting Aliens‘ Newt requires ignoring Alien 3: James Cameron‘s classic Aliens ends with Ripley (Sigourney Weaver) escaping LV-426 along with Newt, a wounded Corporal Hicks (Michael Biehn), and the synthetic Bishop (Lance Henriksen) who is badly in need of repair. In the follow-up a smuggled xenomorph egg hatches on the ship while the survivors are in cryostasis, a fire on the ship causes the survivors to be sent away in an escape vessel, but the only ones to survive are Ripley and Bishop (the latter of whom Ripley deactivates at his request).

Resurrecting Aliens‘ Newt not only erases the canon from Alien 3, but also presumably does away with the story from the final film in the original series–ironically named Alien: Resurrection. After discovering she’s been impregnated with one of the xenomorphs, Ripley kills herself at the end of Alien 3 to prevent its birth. The 1997 sequel has Sigourney Weaver return as a clone of Ripley whose DNA is mixed with that of the xenomorph’s.

It will be interesting to see if any of Aliens‘ other survivors join Newt in the sequel film. With Alien 3 no longer being considered canon; that means Bishop, Hicks, and Ripley could all still be around.

We’re not holding our breath for Ripley’s cat Jonesy though. The folks guiding the Aliens franchise can retcon as much as they want, but the poor little dude can only be left alone for so many years. 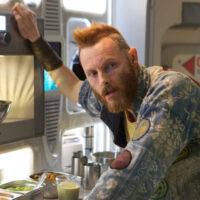