The Worst Ewan McGregor Movie Is Racing Up The Streaming Charts

Ewan McGregor is riding high back as Obi-Wan Kenobi, but his worst movie is getting a lot of streaming views at the same time.

Ewan McGregor broke out to audiences with 1996’s colorful, zeitgeist-defining drama Trainspotting, in which he managed to make a duplicitous, weak-willed heroin addict seem like a sympathetic protagonist. Since then, his most successful roles have tended to lean into his inherent charm and aura of decency, whether it’s as an idealistic writer in Moulin Rouge! or as a CGI Lumière in the live-action Beauty and the Beast remake. Ewan McGregor is currently having another moment in the spotlight as the eagerly anticipated Obi-Wan Kenobi series is dominating Disney+. As you might expect, it is causing another of his projects to shoot up to the top ten most-watched movies on Disney’s streaming platform: Star Wars: Episode I – The Phantom Menace.

What can one say about The Phantom Menace that has not already been said? The first in George Lucas’ Star Wars prequel trilogy starred Ewan McGregor as a younger version of Obi-Wan Kenobi, a role that he has carried on into the current series. His performance is generally considered one of the high points of the prequel trilogy, but The Phantom Menace does him no favors. It makes complete narrative sense that George Lucas wanted to contrast the aged, wise version of Obi-Wan Kenobi as seen in the original trilogy with a less experienced, fresh-faced one. In that, McGregor pulls it off; his version of Kenobi constantly questions his mentor Qui-Gon Jinn (Liam Neeson), is prone to doubt and impulse, and clearly has much to learn. On the other hand, Ewan McGregor was fighting an uphill battle against George Lucas’ dialogue, a terrible rat-tail haircut, and the unachievable expectation of Star Wars fans who had waited nearly two decades for a new film.

Since the conclusion of the prequel trilogy, many actors have spoken about the difficulties of making the movies. Ewan McGregor has openly spoken of how the harsh reviews leveled against The Phantom Menace (not entirely unfairly, it should be said) sapped his enthusiasm. He also spoke about the difficulty of acting against green screens, a digital technique that is now a filmmaking standard but was then in its infancy. He did not get the dangerous level of fan venom that drove a young Jake Lloyd (who portrayed Anakin Skywalker as a nine-year-old) out of show business or depressed Jar Jar Binks actor Ahmed Best to suicidal ideation. But then, he had much more star power and was able to adapt his acting into an increasingly better performance as the Jedi Knight.

And it must be said: Ewan McGregor or not, The Phantom Menace is simply not a very good movie. There was no way it could possibly have met fan expectations after decades, but it also simply does not succeed on its own merits. The movie launched a thousand jokes about the predominance of trade regulations and blockades as a narrative center, but it also had wacky characters like Jar Jar Binks doing pratfalls and the return of R2D2 and C-3PO, logic be damned. Neither the overly “mature” story of the former or the blatant appeal to children of the latter landed evenly for anyone, and the combination of the two diminishes both. Even sequences like the well-made and exciting Tatooine podrace leave an unpleasant taste in the mouth when you realize that it was designed as a direct tie-in to a Star Wars-branded racing game.

Then again, Star Wars was always a merchandise cash cow, whether fans want to think about it or not. Ewan McGregor took the part of young Obi-Wan Kenobi as a fan of the franchise (famously being unable to not make lightsaber noises while filming), which may be why he pulled off the single most convincing performance in the movie.

The Phantom Menace long ago stopped being a movie and became a cultural talking point. As a young star, Ewan McGregor found himself not just acting in a movie with laser guns and droids but joining a series that had become representative of pop culture as a whole. In the decades to come, it would turn in on itself and become rabidly toxic, and eventually even George Lucas divested himself of the whole thing. Under Disney’s stewardship, Star Wars has become much less weird and more prone to cherry-picking the best ideas of years of canon and non-canon stories. They were smart to finally bring Ewan McGregor back into the fold and to allow him to get some more redemption for this unfortunate chapter. 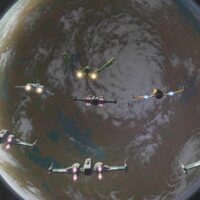