In an interview that was published in September 2020, John Boyega told GQ, “I’m the only [Star Wars] cast member who had their own unique experience of that franchise based on their race.” One might argue that Kelly Marie Tran might have something to say about Boyega’s use of the word “only,” but regardless while Boyega’s quote could have been true in 2020, it isn’t true any longer. At the end of May, Obi-Wan Kenobi star Moses Ingram — who plays the fierce Third Sister Reva in the series — posted a video discussing the “hundreds” of racist and threatening comments and DMs she’s received since the series premiere began streaming. Thankfully, Ingram isn’t alone. Ewan McGregor is letting fans know exactly how he feels about the abuse directed at his co-star.

On Tuesday night, the official Star Wars Twitter account uploaded a video from Ewan McGregor, presumably made in his car. The Obi-Wan Kenobi star begins by thanking fans for making the new series “the most watched Disney+ original series premiere of all time.” But then the subject of the abuse Moses Ingram was being forced to endure came up. McGregor continued, “However, it seems that some of the fan base, from this influential fan base, have decided to attack Moses Ingram online and send her the most horrendous, racist DMs. And I heard some of them this morning and it just broke my heart.” You can watch McGregor’s message below.

Ewan McGregor leaves no room for ambiguity in his video. He makes the recording both as Obi-Wan Kenobi‘s lead and one of its executive producers and puts both himself and the series in support of Moses Ingram:

“Moses is a brilliant actor, a brilliant woman, and she’s absolutely amazing in this series. She brings so much to the series… and it just sickened me to my stomach to hear this had been happening. I just want to say as the leading actor in the series, as the executive producer on the series, that we stand with Moses. We love Moses and if you’re sending her bullying messages, you’re no Star Wars fan in my mind. There’s no place for racism in this world, and I totally stand with Moses.”

Ewan McGregor isn’t the only Obi-Wan Kenobi star who took to social media to defend Moses Ingram either. Kumail Nanjiani plays the con-man Haja in the series, who we first meet fooling victims out of money by pretending to be a Jedi, but he later has a change of heart. A few hours before McGregor’s video was posted, the Eternals star posted a tweet calling Ingram “a phenomenal person and actor.” You can see that tweet below.

Earlier the same day Ewan McGregor’s video went live, the official Star Wars Twitter posted its own message about the hateful abuse Moses Ingram was receiving. While a lot of fans seem happy about the franchise stepping up to defend their star, for some it highlights past failures. As anyone who remembers when the first teaser trailer for The Force Awakens premiered, far too many Star Wars fans went absolutely insane at the possibility that a Black man could play a storm trooper. And as the fan tweet below points out, Boyega was sadly only one of many Star Wars actors to face such abuse.

Ewan McGregor’s new series Obi-Wan Kenobi streamed its third episode today and Giant Freakin Robot’s own Drew Dietsch reviewed the first two chapters. If any of the kind of people who would ever consider leaving Moses Ingram or any other Star Wars actor racist and/or bullying messages read this, you might want to check out his take on the first two episodes. You will find that those episodes didn’t manage to win Drew over, and yet he managed to communicate that without being hateful or abusive. See? You actually can dislike something without being an absolutely ridiculously horrible person about it. Who knew? 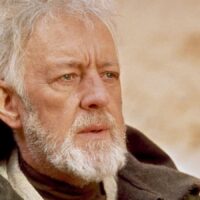