James Cameron’s Avatar fans have waited 13 years for the highly anticipated sequel Avatar: The Way of the Water. According to The Hollywood Reporter, the journalists who have viewed the film’s screener and other attendees at the London Premiere all agree that Avatar 2 beats the original 2009 film with its storyline and cutting-edge visual effects.

Avatar 2, which opens in theaters December 16, is being praised for the visual effects but chided for a runtime over 3 hours long. One other critical comment comes from the abundance of characters which makes for diluted storylines. But overall, it seems that Cameron, true to his nature, pulls off what many believe he could not with this sequel. This is exciting news for fans who have waited for what seems like forever for the release of this movie.

Many reviewers praised Cameron for his vision for Avatar 2, using words like “visual masterpiece,” “breathtaking vistas,” and “a total thrill.” Ian Sandwell of Digital Spy commented on the number of characters and thin storyline. He would go on to say that Cameron made it work with a fantastic emotional and thrilling conclusion.

It will be exciting to see the critics’ reactions to Avatar 2 when they submit their reviews on December 13. The original movie received high praise from critics for its groundbreaking visual effects. That film would break box office records and was the highest-grossing film of the time.

The original Avatar movie broke Cameron’s highest-grossing movie record, which was held by Titanic for 12 years. Avengers: End Game would then go on to beat Avatar’s highest-grossing film record in 2019, but a re-release of Avatar in the Japanese market would see it reclaim the top spot in 2021. Avatar 2 is will have to replicate the success of its predecessor to see more sequels released.

Many have questioned how Weaver would return when her character, Dr. Grace Augustine, was killed in the first movie. In Avatar 2, she will return as a character named Kiri, the adopted teen daughter of Jake (Worthington) and Neytiri (Saldaña).

Avatar: The Way of the Water will take place a decade after the events of the original. This story will follow the Sully family while they experience troubles, keep one another safe, battle their enemies and endure tragedies.

Cameron has already filmed the third installment and has begun production of the fourth. These titles are expected to release in 2024 and 2o26, with a fifth in 2028. Cameron’s goal with Avatar 2 and the remaining sequels is to create his own Lord of the Rings world. Those films had books as source material, but Cameron states that he had to write his own books (scripts) and then begin creating his stories for the screen. 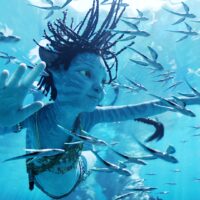