Erica Durance began her acting career as Erica Parker. She was married from 1996 to 1999 to Wesley Parker and kept her married name as she began her Hollywood career. Under the name of Parker, she was seen in a few TV movies, features and series, all that include The Lone Gunman, The Untold, House of the Dead, Devil Winds, and 111 Gramercy Park.

In 2001, Erica Durance began dating writer, director, and actor David Palffy with the two marrying in 2005, but Durance had given up her first married name, going back to her maiden and has since kept it.

Erica Durance flew on board the popular Superman series Smallville in 2004, joining it during its fourth season. She played Lois Lane, the uber-popular comic book character, first appearing as a sassy teenage Lois.

Executive producer Kelly Souders reflected on her first impression of Erica Durance as Lois Lane: “There were a lot of wonderful actresses who came in for the role but I remember… sitting and watching her tape and everybody was like, ‘That’s her. There’s no question,’” Souders said. “She had attitude but at the same time was totally lovable. And she’s just been blossoming and growing ever since.”

For Erica Durance’s part, her outlook on becoming Lois Lane was first to look at the original character, then somehow make it her own. “Everyone has their specific idea of who Lois Lane is for them, and you have your overall blueprint, but then you have to try to make it your own. That’s the only way to try to stay truthful to what you’re doing. It’s an experience I will cherish always and never forget. Lois is a beloved character. I took that seriously and put my heart and soul into her for seven years. I enjoyed every minute and am forever changed by it.”

And that she did, making what was first to be a few episodes early on to see how fans would take to her portrayal of the iconic character, then turning it into a seven-year run.

With Smallville ending its popular run in 2011 after ten seasons, Erica Durance quickly moved on to another hit series, this time in a different type of superhero story. As the lead in Saving Hope, Durance played Dr. Alex Reid, a chief surgical resident whose fiancé, Dr. Charles Harris is in a bad car accident leaving him in a coma. The story focused on Reid as she struggled to maintain her work as well as her husband-to-be’s coma. The story has a supernatural bent to it as Harris wakes from his coma at the end of the first season but subsequently, he can see spirits of comatose and dead patients.

Unfortunately, the series lasted only one season in the U.S. though it did see a five-season run in Canada.

Erica Durance didn’t rest on her laurels with the success of both series, as she found herself starring in other projects during the run of both series. She was in Andromeda, Stargate SG-1, and The Collector as well as TV movies such as I Me Wed, Final Verdict, Beyond Sherwood Forest, and Wedding Planner Mystery. She was also seen on the TV series Charlie’s Angels and Harry’s Law. In 2010, Durance joined the series Supergirl in a recurring role.

THE LOIS AND CLARK REUNION

Lois and Clark return. That was the billing when the DC event Crisis on Infinite Earths was announced. It was the massive crossover event that encapsulated the CW TV shows Arrow, The Flash, Supergirl, Batwoman, and Legends of Tomorrow. The event would jump from part to part, series to series, bringing back many of the big names from the past.

While Durance also played her role of Alura Zor-el in the Supergirl portion of Crisis, she also returned with Tom Welling (Clark Kent/Superman) as Lois Lane in the Batwoman portion of Crisis. It was a nice return, not only to see Durance and Welling back in familiar roles but to also see the many other stars to come back to their familiar roots.

Erica has worked for World Vision Canada, helping raise money to create better lives for families and communities of poverty and injustice. Erica Durance has also given her time for the art auction at the Wizard World Chicago convention, helping raise money for the Sam Loeb College Scholarship Fund. Sam Loeb, the son of Smallville producer Jeph Loeb, passed away at the young age of 17 from bone cancer.

Durance isn’t acting as much as she once was, most of her recent work has been confined to guest spots in various DC universe television projects like the aforementioned Crisis on Infinite Earths and Hallmark holiday movies. As her kids grow older and go off to school, here’s hoping that changes. We’d love to see more of Eric Durance back on television. 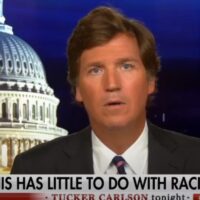 Tucker Carlson Accuses NYT Of Targeting His Family For Assault