This new model, which will be available to the public in March 2021, is huge. When completed each Enterprise-D measures over 2 feet long (over 27-inches), comes complete with working lights, and is theoretically easy enough to build, not using any glue but screws and clips to keep it together.

The best part here is you’re getting an Enterprise-D replica that’s nearly movie level filming ready and it only costs around $55 a month. It’s delivered as a subscription service in which new parts to assemble are delivered monthly. Replicas like this, particularly with lights on them, usually cost thousands of dollars. Ordering is happening over with the expert starship model makers at Eagle Moss.

The makers of the model went to extreme lengths to make this model of the Enterprise-D as realistic as possible. They based their product by carefully studying the original shooting models from the actual series, of which there were three. Each of the three TV models had subtle differences. Industrial Light and Magic (the effects company founded by George Lucas) first created a six-foot version that would separate and a two-foot version that was less elaborate than the six-footer that would be used for distant shots. During the series’ third season, a four-foot version was built to be less cumbersome and easier to use. This new model is a combination of all three versions and their design team has made it look as close to the onscreen versions as they possibly could.

This over two-foot model will come equipped with a working port and starboard navigation lights, screen-accurate Starfleet decals, transporter emitters, a number of light-up windows, all set on intricately painted hull paneling.

With that in mind, designers made the U.S.S. Enterprise NCC-1701-D twice as long and eight times the volume. An improved quality of life was shown with this new Enterprise-D as it was made brighter and less militaristic looking. Roddenberry’s vision for the new Enterprise was to show a balance between science and the quality of life. He definitely succeeded.

Making the new Enterprise-D a vital part of the series and movie was none more evident at the conclusion of Generations, a conclusion which didn’t sit well with Trekkies. After sustaining heavy damage from an attack by the Duras sisters, the Enterprise’s warp drive coolant leak causes a massive explosion destroying the engineering section, with its saucer section crash landing on the planet Veridian III. This version of the Enterprise was damaged beyond repair.

Thankfully this new model should not see the same fate. On top of the pieces being sturdily built, you will also have the option to grab a deluxe display base on which you can mount your U.S.S. Enterprise NCC-1701-D starship. You can take a closer look at the model here. 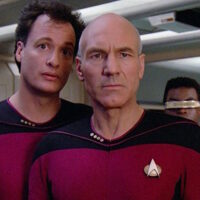