Her biggest moment was perhaps on The Walking Dead, where she was the show’s first, major, gut-punch death. Here’s what happened to Emma Bell after that.

Hit and miss pretty much can describe Emma Bell’s career in a nutshell. She is a talented actress, having started her career at the young age of 12 in an Off-Broadway cabaret show. But her first official screen debut came when she was 18 in the TV series Third Watch. It took the young actress two more years to find her next project, but she did in the mini-series The Bedford Diaries. Things began to pick up for Bell the following year as she found a guest spot on Law & Order, then began a run on feature films. She starred in Gracie, The Favor, New York City Serenade, and Death In Love.

It looked as if Emma Bell had found her footing in Hollywood. She was beginning to get more and more work. She was part of a couple of big series, guest-starring on the Ghost Whisperer, Dollhouse, and Supernatural. Then she had the lead role in the thriller Frozen (no, not the Disney cartoon). The story was about three friends who convince a ski lift attendant to let them on the lift one last time. A misunderstanding ensues between the attendant and his replacement resulting in the replacement shutting down the ski lift with the three friends still on it, high above the ground. There they sit, trapped, trying to figure a way down. Bell played Parker O’Neil in the movie and her character made a brief, uncredited return in Frozen writer and director’s next movie, the horror slasher film, Hatchet II.

EMMA BELL ON THE WALKING DEAD

Emma Bell was brought on board to play Amy, the younger sister of Andrea (Laurie Holden) and she is one of the original survivors out of Atlanta. According to series comic book creator Robert Kirkman, even though Bell knew from when she was hired that her time would be short-lived, it was nevertheless difficult to see her character get chomped on. It was also the first episode the scribe had written for the series, though he was holding the executive producer’s role.

Kirkman told Entertainment in a 2010 interview just how difficult it was to say goodbye to Bell in the episode titled Vatos. “…it’s something that’s very difficult for me. Because it is lines on paper when I do it in the comic book series. It’s like, “Oh, okay, Charlie [Adlard, Walking Dead illustrator] doesn’t have to draw that arrangement of lines anymore, that person is dead.” But it’s very uncomfortable for me to be on set, because I see these actors that are there and, in the source material, I have killed all but two of them. I walk through the set and I’m like, “Yep, killed that one, killed that one, killed that one.” And it is firing those people. I feel really bad for Emma Bell, just because she was great and I would have liked to have had her in the show. But, you know, this is the Walking Dead, characters have got to die. Thankfully, Emma was brought onto the show with the understanding that she was only going to be in a certain number of episodes and she knew that she was going to die from the very beginning. But it doesn’t really make it any easier. When they were shooting those scenes, I had to fly to Comic-Con and so I wasn’t actually there for when she died. But it was very emotional on set and I know that she was very upset about having to leave the crew and the actors. You kind of become a family when you’re doing a TV show and it’s a little upsetting to have to get rid of somebody.”

Even though Emma Bell died a gruesome zombie death on The Walking Dead, her 2010 was good for one more reason. She was one of the 55 faces of the future by Nylon Magazine‘s Young Hollywood Issue.

AFTER THE WALKING DEAD

Even though her time on The Walking Dead was short-lived, Emma Bell’s career continued. Her next “almost” came with the reboot of the long-running hit series Dallas. Her character, Emma Brown, was introduced in the series’ second season as the daughter of Ann Ewing and Harris Ryland and immediately caused trouble. She had affairs with bad boy John Ross Ewing III (Josh Henderson) and also with another series bad boy Drew Ramos. Unfortunately for Bell, the series only lasted three seasons.

Not to be swayed by her recent “almost”, Emma Bell moved on. She found more roles both on the big and small screens. On the big screen, the actress was in See You in Valhalla, A Quiet Passion, Different Flowers, and Plus One. On the small screen, Bell found time on Rizzoli & Isles, American Horror Story, Kevin (Probably) Saves the World, Lucifer, and another “almost” in the series Relationship Status. This one lasted seven episodes.

Emma Bell has also dabbled on the other side of the camera, writing and directing shorts.

In 2018, Bell married actor Camron Robertson in Big Sur, California and was gushing in her Instagram post of her nuptials.  “Last weekend I got to marry the person I love the most @camronr in the place I love the most with the community I love the most,” Bell wrote. “It was truly an epic weekend. Thank you to the Milky Way and @thomas.marchese.photography for showing up and capturing all the love.”

In a career that has been filled with many “almosts”, her marriage was one role she got to completely fulfill. Now 33-years-old Emma Bell continues her acting career as she was recently seen on NCIS and the features Why? and The Argument. 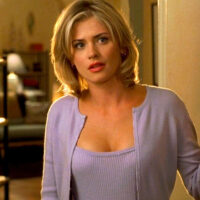