Eiza Gonzalez doesn't like the attention she's getting online for possibly being cast as Daredevil: Born Again's Elektra.

Rumors have circulated online that actress Eiza Gonzales has joined the upcoming Marvel project Daredevil: Born Again. Gonzales set the record straight on social media regarding her involvement in the anticipated MCU series. Despite some claiming Gonzales will star as Daredevil’s love interest, Elektra, the actress has stated she’s not joining the MCU.

The Eiza Gonzalez Marvel rumor apparently stems from a Reddit post suggesting the actress would be announced to play Elektra during 2022 San Diego Comic-Con. While MCU President Kevin Feige did reveal Daredevil: Born Again, he did not confirm whether Elektra would appear nor if Gonzalez would join the MCU. In fact, the only casting announcements he did make was that Charlie Cox and Vincent D’Onofrio would reprise their roles in the upcoming Disney+ series.

Following Eiza Gonzalez denying the Marvel rumor, fans began targeting the actress on social media. The backlash seems to have been tied to Gonzalez’s acting ability and the idea of a Latina actress possibly portraying a Greek character. In response to all the backlash, Gonzalez has asked if she “could live free of negative ill intended messages” about her.

We reported that Eiza Gonzalez would be joining the MCU, though it wasn’t known which role she would partake in. We speculated that Gonzalez would be an excellent Elektra and a great fit for other parts. The actress has been on Hollywood’s radar for quite a while now.

Deadline reported that on August 3rd, 2021, Eiza Gonzalez would star in the David Benioff and D.B. Weiss Netflix series Three Body-Problem. Based on the novel of the same name, the sci-fi series centers on a Chinese physicist and nanomaterial researcher who gets entangled in a conspiracy after state intelligence asks him to infiltrate a group known as The Frontiers of Science. Production of the series began on November 8th, 2021. The Eiza Gonzalez project perhaps may be a step towards her getting a Marvel role.

Eiza Gonzalez’s involvement in the series has been kept quiet since it was announced to premiere on Netflix. In addition to her role here, she’s also set to star in an anthology Apple TV+ series, Extrapolations. The series is from Bourn Ultimatum director Scott Z. Burns.

While she may not be joining the MCU anytime soon, that doesn’t mean Eiza Gonzalez isn’t getting tons of work in Hollywood outside of Marvel. After her work on Michael Bay’s Ambulance, the actress signed on to star in the boxing Hulu series La Maquina alongside Star Wars actor Diego Luna. According to Variety, Gonzalez will play an inspiring sports journalist named Irasema.

The 32-year-old actress is currently building her career right now. Perhaps someday Eiza Gonzalez will end up joining Marvel. However, that all depends on her and if the folks at Marvel see a role that best suits her. As of now, here’s hoping everyone will stop bothering the very talented actress and let her shine in other projects outside of the Marvel machine. 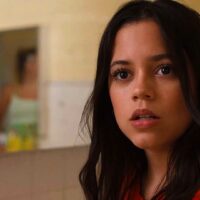