Dwayne Johnson is known for his wrestling career and his roles in a variety of action franchises, including The Fast and the Furious and the Jumanji reboot. He is known for his tough-guy persona as well as his heart of gold and his steamy good looks, yet the top Dwayne Johnson movie streaming right now – indeed, the top movie streaming overall – is not his typical action flick.DC League of Super-Pets is the most-streamed movie this week on HBO Max in countries as diverse as Argentina and Indonesia, as well as in the United States.

The animated movie tells the story of Superman’s loyal canine sidekick, Krypto, who must organize a rescue mission when Superman and the other DC heroes are kidnapped. As the mysterious Orange Kryptonite begins giving superpowers to pets, it is up to Krypto to guide them through using their new abilities and save the Justice League.

Dwayne Johnson stars as the voice of the intrepid dog, and the rest of the cast is loaded with recognizable names, including Kevin Hart, Kate McKinnon, Natasha Lyonne, John Krasinski, and Keanu Reeves in the roles of the various pets and their superhero counterparts. The movie was released in theaters in July 2022 and became available for streaming on HBO Max on September 26, 2022. It amassed a worldwide gross of $193 million at the box office to mostly positive reviews that praise it as a fun family movie that can be enjoyed by adults as well as kids.

Thanks to the success and reception of the movie, Dwayne Johnson announced in August 2022 that it will be the first in a franchise. The movie also hints at a connection to another Dwayne Johnson project, Black Adam, which is being released in the United States on October 21, 2022. The theatrical release date of DC League of Super-Pets was adjusted as part of the Black Adam release date.

Dwayne Johnson started his career as “The Rock,” his trash-talking professional wrestling persona that became a fan favorite, after spending high school and college building his reputation in football. When professional football didn’t work out, he turned on his charm and charisma to become the center of professional wrestling’s “Attitude Era,” which was a golden age for viewership. He appeared in the most-viewed Wrestlemania pay-per-view as well as the highest-rated episodes of pro wrestling matches such as Raw and SmackDown.

His career took another major leap when he appeared as The Scorpion King in The Mummy Returns and then The Scorpion King. This began his career as a movie star, and throughout the early Aughts he built up a resume that included action-adventure and sports-action films like Walking Tall, Doom, and The Game Plan. His supporting role in 2005’s Be Cool, a sequel to Get Shorty, showed off his acting chops as the nuanced comic-relief character Eliot Wilhelm, a gay bodyguard with the personality of a happy puppy and aspirations of becoming an actor.

Arguably, it was the introduction of his character as Luke Hobbs in Fast Five in 2011 that propelled him to the stardom he enjoys today. This drew his roles in action comedies such as Jumanji: Welcome to the Jungle and Baywatch, as well as action-oriented films like the sensitive Skyscraper. He also appeared in family movies like Disney’s Jungle Cruise and lent his voice – singing as well as speaking – to show his Pacific Island pride in Moana.

Dwayne Johnson is also a producer and philanthropist. He was behind the HBO comedy series Ballers and is credited as a producer on the Jumanji movies that feature him. He has also participated frequently in Make-A-Wish Foundation projects and numerous Pacific Islands projects, including a film about king Kamehameha I, founder and first ruler of the Kingdom of Hawaiʻi.

It is no surprise that Dwayne Johnson has the star power to be leading the top streaming movie today, and his involvement in family movies made a film like DC League of Super-Pets a sure hit. Many people would expect one of his action movies to be Dwayne Johnson’s top streaming movie, but his appeal to a wide variety of audiences is what makes his work so great. DC League of Super-Pets is currently streaming on HBO Max and is available on DVD and Blu-Ray on October 4.

Jumanji 4: When Will This Dwayne Johnson Movie Start Filming? 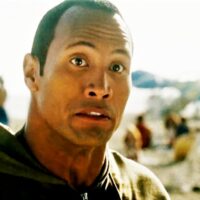