Dwayne Johnson Is In Star Trek, See Who He Played

These days, when it comes to action flicks, Dwayne Johnson is one of the most sought-after leading men in Hollywood. But before that happened, he had to make the transition out of the pro-wrestling world. While the Rock’s appearance in 2001’s The Mummy Returns might be the earliest memory of Johnson playing an antagonists to many fans, the truth is Johnson’s first non-wrestling action screen role aired a year earlier on UPN — specifically, he was cast in the fitting role of The Champion on Star Trek: Voyager.

In fact, because of the story that Dwayne Johnson appears in, his character enjoys an honor few can lay claim to — he kicked the cybernetic butt of the reformed Borg, Seven of Nine (Jeri Ryan), arguably Voyager‘s toughest regular character. In spite of their characters’ on-screen hostility toward one another, Ryan has nothing but good things to say about The Rock. Speaking to The Big Issue in February, Ryan described Johnson as “a super sweet, unassuming gentle guy… We’re talking about our kids and he’s just lovely.”

How does Dwayne Johnson enter the universe Gene Roddenberry made? Well, Trek has no shortage of gladiator-type combat, and it’s in that kind of setting that he meets Seven of Nine. In the season six episode “Tsunkatse,” Seven and Tuvok (Tim Russ) are kidnapped by aliens who run a popular arena, and Tuvok is badly injured in the process. The arena promoters use Tuvok’s injury as leverage, promising they will only keep him alive if Seven fights. Johnson’s unnamed Champion is from the Pendari race and — standard for the races of that era of Trek — his main distinguishing alien feature is weird stuff on his forehead. In one memorable shot, Johnson gives fans a fun, fourth wall breaking treat and delivers his signature eyebrow raise to the crowd. You can watch the tussle between the Champion and Seven below.

In a 2018 interview with StarTrek.com, producer Rick Berman singled out Dwayne Johnson’s career as a source of pride. “It makes me feel terrific… that there are some actors that we gave a first job to that have become successful, ” Berman said. “People like Dwayne Johnson, whose first acting job I think was on Voyager, and he’s a world-renowned movie star now.” Technically, Berman isn’t completely correct. Johnson had already appeared on both That ’70s Show and The Net before Voyager, but it was still an early opportunity The Rock was no doubt grateful for.

While speaking to The Big Issue, Jeri Ryan said that before working with Dwayne Johnson, she was completely unfamiliar with his work in wrestling. So, she was understandably confused when — after he had finished his work on Voyager — Johnson left an autographed photo in her trailer with the note “The Rock smells what you’re cooking.” Ryan said it was “the weirdest thing” she’d ever seen anyone write, and it took the intervention of crew members who were also wrestling fans to educate her.

It doesn’t seem super likely that Dwayne Johnson would ever return to Trek, but who knows? As long as Vin Diesel isn’t also involved, The Rock seems like a “never say never” kind of guy. As for his “Tsunkatse” opponent, Jeri Ryan is currently starring once more as Seven of Nine on the second season of Star Trek: Picard. The season premiere streamed last week, and episode 2 will stream on Paramount+ starting Wednesday morning. 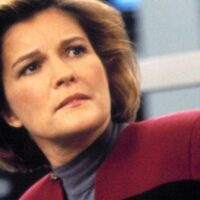