By Jonathan Klotz | Published 4 weeks ago

After Dick Clark finally passed on the hosting duties for his iconic New Year’s Rockin Eve to Ryan Seacrest, the American Idol host has had rotating co-hosts, and the master of ceremonies already knows who he wants for next year. Speaking to the New York Post, Seacrest mentioned his dream co-host as “The Rock, Dwayne Johnson. Dwayne Johnson in Times Square would be the greatest because it’s packed and people would pay attention to him.”

Dwayne Johnson has become the largest star on the planet, something that was unthinkable back in 1996 when Madison Square Garden was rocking with chants of “Die Rocky Die.” The former WWE champion has gone on to become the most electrifying man in Hollywood, so when Ryan Seacrest says that The Rock could get everyone packed into Times Square to pay attention, he is not wrong. While Johnson is the dream co-host, Seacrest had another star with him this year, Liza Koshy.

The YouTube star, with over 17 million followers, was co-hosting for the second straight year alongside Seacrest. The pair successfully hosted the top-rated program of New Year’s Eve, with over four million viewers. In addition to being a magnetic personality in person, Dwayne Johnson would be the biggest star on the screen, automatically making the ABC tradition into the must-watch event of the night.

Dwayne Johnson’s popularity may have taken a hit lately after the box office failure of Black Adam, and his social media damage control in the weeks after its release. The Rock recently confirmed that Black Adam won’t be part of the first wave of DCU movies being developed under James Gunn, bringing a disappointing end to his decade-long campaign to bring the character to life. Despite his first comic book adaptation being disappointing, the third-generation professional wrestler is still one of the most recognizable men on the planet.

With a total box office haul of over $5 billion, ranging from Moana to Fast and Furious, the surprising hit Jumanji, and the recent Netflix hit Red Notice, there is no denying what Dwayne Johnson has accomplished. The star has even hosted events before, including Shark Week 2022, but Dick Clark’s New Year’s Rockin’ Eve would be the largest event he’s hosted since Wrestlemania 27 at the Georgia Dome. If you forgot that particular event, it’s okay, that was the one with The Miz as World Champion.

Dwayne Johnson might be back in the ring in 2023, with rumors circulating that he could be facing his cousin, Roman Reigns, at Wrestlemania in Los Angeles. If The Rock gets back in the ring, it will go a long way to washing the taste of Black Adam out of the mouths of fans, giving him a showcase for his incredible charisma and a chance to get a live crowd eating out of the palm of his hand. If Ryan Seacrest, one of the hardest-working men in show business, has his way, we might get to see The Rock in front of the largest New Year’s Eve parties on the planet.

The Rock Has Been Dethroned As A Hollywood Favorite? 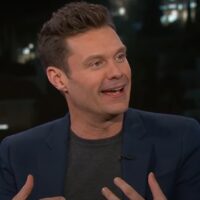