Dwayne Johnson's Jumanji: The Next Level is the fourth most-watched movie on Netflix.

Dwayne Johnson famously once referred to himself as “franchise Viagra,” claiming that he was brought into a series to revitalize it when popularity had begun to wane. Although that appears to be not all that accurate when it comes to the DC Universe, it certainly did the job for the Jumanji franchise. The second movie in the wildly popular Dwayne Johnson-led reboot, Jumanji: The Next Level, is currently the number four most-watched movie on Netflix, which is pretty impressive for a franchise that started back with a single children’s book.

Jumanji: The Next Level brings back the primary cast from the 2017 reboot, with Dwayne Johnson, Karen Gillan, Kevin Hart, and Jack Black all returning as character avatars in the in-game jungle of Jumanji. In the real world, Alex Wolff, Morgan Turner, Ser’Darius Blain, and Madison Iseman also all return as teens who managed to win the game last time, but now get sucked back in. This time around, Danny DeVito and Danny Glover as grandparents and estranged business partners manage to wind up in the game, taking over characters previously played in the earlier movie and leading to all sorts of confusion about who is who as they get entangled in a new video game style quest.

One of the most interesting aspects of 2017’s Jumanji: Welcome to the Jungle was the idea that the game had evolved from the board game seen in the 1995 Robin Williams film to a video game system. While The Next Level does not make as much of a leap in concept this time around, the idea that character avatars like Dwayne Johnson’s Dr. Xander “Smolder” Bravestone aren’t fixed to a specific person is pretty fun too. Think of it like someone chose your favorite fighter in Mortal Kombat and now you have to fumble around with Reptile until you figure things out.

Jumanji: The Next Level was an enormous success at the box office, grossing over $800 million at the box office against a $125 million budget. While it did not reach the heights of Welcome to the Jungle’s $962 million, it was still more than enough to guarantee another sequel, which is scheduled to arrive sometime in 2023. Not only that, but it appears the forgotten 2005 film Zathura: A Space Adventure is being folded into the franchise and developed as another Dwayne Johnson property.

This makes sense, considering that Jumanji and Zathura were both adapted from books by Chris Van Allsburg, the latter of which even included a number of references to its jungle-set sister volume. At this point, it seems that Dwayne Johnson may have found himself in unfamiliar territory, needing to latch onto a strong franchise more than one needs him. Although all signs indicated he was being positioned as the new center of Warner Bros. Discovery’s DC Universe, he appears to have been de facto ousted by new management and needs a new gig.

That’s exaggerating things, of course. Dwayne Johnson is one of the biggest and busiest stars in the world and could sign up for a dozen films guaranteed to make an easy nine digits at the box office any day of the week. We’re going to guess he’s going to stick with Jumanji for a while, all the same. 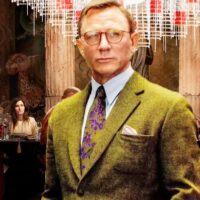 The Reality Of When Knives Out 3 Will Be Released