Of Star Trek's many alien heroes, Saru--played by Doug Jones--is the most layered.

It’s bound to be an unpopular opinion–particularly among old school fans and those who wrote off Star Trek: Discovery almost as soon as it aired–but as someone who’s seen every movie and almost every episode of every Trek series (I am still a little delinquent in my The Animated Series and Prodigy viewing), I’m confident in saying Star Trek has no more compelling alien hero than the Kelpien Captain Saru of Discovery. Which isn’t to say I want to hate on all the others. If you don’t show your respect for Spock, Jadzia, Worf, Rom, Garak, Hemmer, Quark, Tuvok, B’Elanna, Tendi, Kira, or Nog then getting out of my face seems like the only option. Even though the series he’s from leaves me underwhelmed, Phlox of Enterprise is my favorite doctor in the franchise. And Neelix is… not necessarily someone we need to bring up right now. The point being that saying Saru is the best is not meant to disrespect on the rest.

We all have our favorites, of course, and I’m not asking anyone to change their minds. But if you give me a chance I think at the very least I can convince you that among the alien heroes of Star Trek, Saru is great in a way in which most of his colleagues are lacking.

In Star Trek, there appears to be a very simple process to creating a new alien species. You pick one thing–an emotion, a concept, an activity, a specific personality trait–and everything about that species revolves around that one all-important thing. For the Vulcans it’s logic. The Ferengi have greed. The Hirogen of Voyager are defined as hunters, the Jem’Hadar of Deep Space Nine judge themselves solely by their obedience to their masters, and the Tellarites mainly seem to value being the Karens of the galaxy.

Everything about these characters–and this is the area of Star Trek in which Saru deviates–begins and ends with the question of their species. If a story of TNG or DS9 focuses on Michael Dorn’s Worf, it will inevitably have something to do with Worf being a Klingon. Either the story will weigh Worf’s devotion to Starfleet against his loyalty to the Klingon Empire, it will highlight the differences between Worf’s values and those of the humans around him, it will highlight the differences between Worf’s values and those of other Klingons around him, or it will measure his warrior’s soul against his more civilized officer’s integrity. Even in the cases of episodes that highlight how different the characters are from their species’ stereotypes, like when B’Elanna has a vision of going to Gre’thor–a kind of Klingon version of Hell or Purgatory–in Voyager‘s “Barge of the Dead”, it’s still all about the character’s alien species just with a “but” in front of it.

On one hand, it stops these alien heroes from being fully realized characters. On the other, it undermines Trek’s inherent messages of understanding and tolerance between different groups. In all of Trek, only humans are allowed to be three dimensional and to have variety. If, for example, the first word you would use to describe James T. Kirk is “adventurous” that’s because Kirk is genuinely adventurous. If that was the first word you would use to describe one of the alien heroes? Well, you would likely only use that word if that’s what their species was known for.

When Star Trek: Discovery first introduces us to Saru, he’s a perfect fit for Star Trek’s alien hero formula. His defining quality? Fear. Before joining Starfleet, Saru lived on a world shared by two races: the Kelpiens and the Ba’ul. In Discovery‘s premiere episode, we’re led to believe that Saru and the rest of his people are cowards. They have threat ganglia on the back of their necks that activate when danger is close. Almost every Kelpien comes to their end the same way–when they go through the process of Vahar’ai, which they believe will ultimately kill them, they are brought before the supposed predator race on their world, the Ba’ul, and are never seen again.

In Season 2 of Star Trek: Discovery, however, the show turns the whole alien hero formula on its head. As Vahar’ai approaches for Saru, he prepares for death, only to inexplicably survive.We ultimately learn that everything Saru and his people have been taught about their existence is a lie. Vahar’ai does not kill the Kelpiens, but rather is a part of their natural evolution. They are not the prey half of the Ba’ul-Kelpien relationship, but in ancient times were the predators. The Ba’ul have created the fiction to keep the Kelpiens subservient. Saru survives only because–separated from his people–there is no opportunity for him to be brought before the Ba’ul to be sacrificed.

The result is that in all of Star Trek, Saru has proven to be not only thoroughly alien, but fully realized. There are a lot of differences between Saru and his Discovery shipmates. He’s taller, stronger, faster, and is gifted with senses we would consider superhuman. When he walks, his arms flow back and forth behind him as if stuck in a constant dance.

But none of these physical qualities–nor what was once the master fear quality of his species–governs how Star Trek: Discovery fans define Saru. Doug Jones’s character is kind but, in his role as Captain, firm. He’s understanding, thoughtful, practical, and calm in the face of chaos. Sure, his species may inform any or all of those things, but that isn’t how we think of him. Spock is who Spock is because he’s half Vulcan and half human. Worf is who Worf is because he’s a Klingon raised among humans. But Saru? Saru is Saru because he’s Saru. 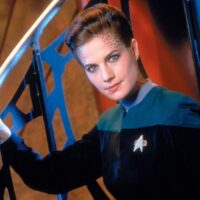 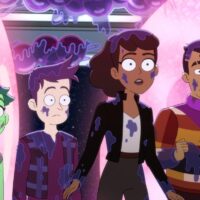