Denzel Washington has been part of so many classic movies at this point that it’s almost tough to keep track. Whether it’s biopics, historical epics, cop films, crime thrillers, feel-good sports stories, military dramas, or Westerns, the dude has really done it all. And he’s been in his fair share of action films as well, holding down that genre when the moment arises. One of those flicks is climbing up the streaming charts too and is definitely worth the watch. Man on Fire is currently sitting second overall on Netflix and offers a great chance to see Denzel in a revenge-style narrative that has him pressing every right button.

In Man on Fire, Denzel Washington plays John Creasy, a former covert special operations agent for the CIA who, from an emotional and mental standpoint, is barely hanging on. Dude is an alcoholic and depressed, clearly having suffered massive trauma from his time in the line of duty. But he still needs to work and while in Mexico takes the job of protecting the daughter of a local businessman. He and Lupita (played by Dakota Fanning) develop a relationship early on and she clearly has a warming effect on Denzel’s character.

But, because this is an action movie, things turn sideways pretty quickly. Lupita is kidnapped in an elaborate scheme and Denzel Washington as Creasy isn’t able to stop it before she’s abducted and held for ransom. This is the part of the movie where the bad guys begin regretting having taken on a dude with a particular “set of skills”. It is one thing to have a bodyguard. It is another to have a dude trained in every manner of violent action, both physical and mental. Denzel Washington begins to work his way up the criminal organization responsible for taking Lupita, even offering the classic line to the leader of the group saying he’s going to “take your family apart piece by piece.” And that he does.

What ensues is a master class by Denzel Washington who is subdued in his actions until it’s totally necessary. And when it is, the antagonists here are regretful for every poking this sleeping dragon. Denzel starts on the lower rungs, slowly, and violently, working his way up the criminal ladder employing all manners of CIA-trained tactics. He is swift and brutal, stopping at nothing in the effort to track down Lupita. This is Taken years before Liam Neeson took a similar strategy. Where those two movies differ is that Man on Fire leans much more into Denzel’s performance, delving much more into the psychology around why he would push himself to the limits to bring the girl home.

Watch Man on Fire and tell me if you agree with the critical consensus on this one. It’s mind-boggling to see this film finish at only 38% on Rotten Tomatoes and 47 on Metacritic. Many reviews focused, undeservedly, on the violence in the film, overlooking the “why” behind the methods Denzel Washington employs in his hunt for the girl. Considering it came out in 2004, the landscape around graphic violence was a bit different at the time, and these days critics likely wouldn’t bat an eye at the force his character uses to get the job done.

Man on Fire is directed by the late Tony Scott who had also worked with Denzel Washington a few years before on Crimson Tide. In fact, four of the director’s final five movies had Denzel Washington in the lead. In addition to this one, there was also Deja Vu, The Taking of Pelham 123, and Unstoppable. The two clearly had a great relationship. Man on Fire was able to take in $130 million on its $70 million budget so it turned a profit, though likely missed some of its targets. Again, this flick was almost made for a different age and definitely still holds up today.

In addition to Denzel Washington and Dakota Fanning, Man on Fire has a few other notables. Playing Lupita’s parents are Marc Anthony and Radha Mitchell. Christopher Walken plays Paul Rayburn who helps land Creasy his gig with the family, and Mickey Rourke plays the family’s somewhat sleazy lawyer.

Denzel Washington’s last movie was The Little Things, a psychological thriller in which he shared the screen with Jared Leto and Rami Malek. His next film will be a Joel Coen’s adaptation The Tragedy of Macbeth. That releases later this week on September 24th. Washington plays the eponymous Lord Macbeth and will be joined by Frances McDormand, Corey Hawkins, Brendan Gleeson. It look like Washington will now be able to add Shakespeare to the resume as well. Before that comes out, go and check out Man on Fire on Netflix. Don’t let the critical scores fool you, this movie is much better than what folks thought of it at the time. 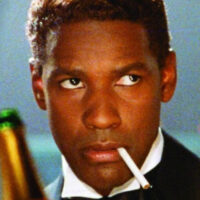