Veteran television actor David Boreanaz has brought many memorable characters to life during his career, from a vampire with a soul on Buffy, to Master Chief Jason Hayes on SEAL Team, but the actor wants the focus to be on future projects and not looking back. There is, one exception, reported by Screenrant, he’ll come back as FBI Agent Seely Booth for a Bones revival series. According to the actor, stepping back into the role of a regular human would be less jarring than seeing an immortal vampire aged into a 50 -year old man.

The grim reality of not looking the same as he did 20 years ago is just one, tongue in cheek, reason for why he’ll come back as Booth but not Angel. David Boreanaz said that “may be a little bit more intriguing, as far as getting back to where he is with Temperance Brennan.” Referring to the key between the his and Emily Deschanel’s characters, Boreanaz cited the banter.

Chemistry between David Boreanaz’s FBI Agent and Emily Deschanel’s forensic archeologist made Bones a ratings juggernaut for FOX. Airing for 112 seasons and 246 episodes, the comedy-procedural featured a light case-of-the-week premise that put the focus squarely on the two leads. Deschanel has previously said that she would enjoy revisiting her role as Bones, especially with other recent revivals creating a template for revisiting the series.

Criminal Minds, a contemporary to Bones, came back earlier this month as Criminal Minds: Evolution, a revival series with some of the original cast but more of a focus on serialization and deeper characterization. David Boreanaz’s Seely Booth went through traumatic ups and downs over the course of the series, but a new presentation freed from the constraints of regular network television, could allow the actor to really dig into one of his favorite roles. Through a series of strange cross-overs, the Bones universe is already complicated, with Seely Booth having appeared in some of the weirdest places, including FOX’s Animation Domination cartoon block.

One episode of Bones had David Boreanaz’s Seely Booth dealing with a traumatic brain injury, which caused the character, in-universe, to hallucinate Stewie from Family Guy. Later on, one of the other Seth McFarlane comedies, American Dad, had Boreanaz provide the voice for Seely Booth, appearing in the animated world as the Bones character. A late season cross-over with the supernatural procedural Sleepy Hollow, which implied magic and ghosts existed in the same world as Bones, is referred to by some fans as the moment that the show jumped the shark.

To most of his fans, no matter what role David Boreanaz is in, he will always be Angel, the vampire that stole the heart of Buffy Summers back in 1997. After three seasons on Buffy, Angel received his own spin-off, sending the vampire and some of the supporting cast out west to Los Angeles. The spin-off was a success, lasting for 110 seasons before ending in 2004, one year after Buffy finished its landmark run.

Today, David Boreanaz is still filling the combat boots of Master Chief Jason Hayes on season 6 of SEAL Team. Away from acting, the Buffy star helps his wife run Chrome Girl, a nail polish line, even helping to create the NHL colors line. 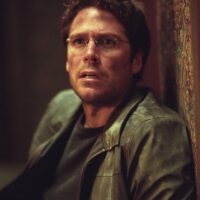 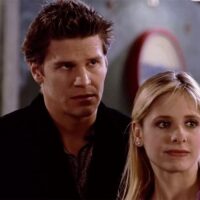