Darkwing Duck didn’t have all that long of a run but was still a memorable show if you’re a child of the ’90s. Saturday mornings and weekday afternoons had plenty to offer for the web-footed superhero who exhibited a quasi-Zorro vibe in an homage to the yesteryear of superhero campiness. Though it had a limited time on the air, it still somehow resonates if you grew up during that time. Which makes it all that much more exciting that a new generation of kids can enjoy the character, since it looks like Darkwing Duck is slated for a reboot.

Darkwing Duck first aired in 1991 and lasted a total of three seasons. It follows the escapades of the aforementioned character who goes under the alias of Drake Mallard. In many ways, it was your standard superhero fare with Mallard using his alter ego to live a “regular” life while caring for his adopted daughter. The show had excellent writing for the time and had an unusual sense of humor not often seen in similar time slots. It specifically did well with its opening lines in which the titular character would remind you metaphorically of his status as a crimefighter.

But even for its solid writing, Darkwing Duck only lasted three seasons before leaving the air. Created by Tad Stones, it wasn’t renewed in 1993 and went off after 91 episodes. Stones went on to work on a number of other Disney animated series like Aladdin, Hercules: The Animated Series, and then over to Universal to work on a bunch of shows related to Hellboy.  He finally returned to Disney to work on Jake and the Neverland Pirates. As of now, he’s not rumored to be attached to the Darkwing Duck reboot.

There’s reason to expect the next iteration of Darkwing Duck to continue having those solid comedic chops. Seth Rogen and Evan Greenberg are already slated to executive produce. Don’t forget that these two have teamed up in the animated world before with 2016’s Sausage Party, which they co-wrote and co-produced together. It’s safe to say their newest show won’t have the same tone as that movie, considering it was about as rated-R as it gets. But the comedy element should be plenty strong with whatever they do with Drake Mallard.

Disney+ is heavy into the reboot game these days. Among others, they have plans to bring back Honey I Shrunk the Kids, Mighty Ducks, and Home Alone along with animated shows like Robin Hood, Chip ‘n’ Dale, and 101 Dalmations. Disney is heavily leaning into the 90’s nostalgia at this point. As of now, there are no release or production timelines for Darkwing Duck, but there’s plenty of reason to get pumped for what amounts to a little-known animated show from 30 years ago. 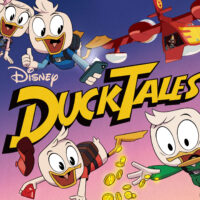