Daredevil: Born Again – When The Charlie Cox Series Be On Disney+?

Daredevil: Born Again was announced and will return Charlie Cox to the main role. It is set to hit Disney+ in Spring 2024.

Whenever Comic-Con rolls around you know that there’s a chance for a number of huge announcements from some of the major studios like Marvel and DC. This latest one didn’t disappoint on that front and fans were treated to the word that Daredevil: Born Again was in the works.

Kevin Feige and company mapped out what to expect in terms of Marvel movies and series for the foreseeable future. Some we already knew about and others were a bit of a jolt to the system. Daredevil: Born Again will reunite one of the best on-screen hero-villain pairings we’ve had.

Let’s take a look at what we know about Daredevil: Born Again and what to expect from this series.

When Netflix let go of the rights to their group of Marvel characters, one of the prevailing questions was what would happen to the core folks in the move to the Marvel Cinematic Universe.

Would they be recast for a new timeline or would we see them transfer over and be inserted into the stories? Could the Netflix run of shows be MCU canon? It’s sure looking that way.

There have been bits and bobs along the way with folks like Charlie Cox and Vincent D’Onofrio making appearances in different productions. But it looks like Daredevil: Born Again will put them on a collision course once again.

Again, this has been in the works for a bit now. We know that New York City has been a focal point of more recent movies and stories with the Netflix folks making their way into productions. Charlie Cox showed up briefly in Spider-Man: No Way Home as only Matt Murdock when he was giving legal advice to Peter Parker, Aunt May, and Happy in the fallout from the Mysterio debacle.

He didn’t don the Daredevil suit but did show off his skills by catching a flying brick coming through the window. Plus, he had a role in the She-Hulk series.

VINCENT D’ONOFRIO IS RETURNING AS KINGPIN

And then Vincent D’Onofrio had a part in Hawkeye when he was brought on as the adoptive father of Maya Lopez. He doesn’t show up until near the end of the show’s run and there is a standoff between him and Lopez/ Echo after the latter realizes he was responsible for her father’s death. Because he’s taking part in Daredevil: Born Again we can make the easy assumption that he didn’t go down that easily. D’Onofrio had the perfect response on his Twitter account about the announcement for the series.

Finally, both Charlie Cox and Vincent D’Onofrio will appear in Echo which is set to hit Disney+ sometime next year, well in advance of Daredevil: Born Again. So we are likely to catch up on this story and set the stage for the new series.

DAREDEVIL: BORN AGAIN CAME OUT IN COMIC BOOK FORM IN 1986

It looks like Daredevil: Born Again will come from the comic book series of the same name that was penned back in 1986 by Frank Miller. On a high level, the story follows the conflict between Matt Murdock/ Daredevil and Wilson Fisk/ Kingpin with the latter becoming increasingly obsessed with ruining Murdock’s life and driving him insane.

It mostly works and there are moments when Murdock truly hits rock bottom. It’s a slow burn with Fisk increasingly applying pressure and ultimately trying to ruin Daredevil.

But as the title suggests, in Daredevil: Born Again there’s a redemption arc and Murdock is able to pull himself basically back out of hell in order to take on Kingpin in the end. It’s unclear if they will derive the story 1:1 from the comic books though it’s unlikely. The reason is that certain elements of this story were already used in Daredevil’s Season 3 on Netflix. Not all of that season was mined from the story mind you so there’s plenty of meat on the proverbial bone. But some parts would be repeated if they tried to go shot-for-shot.

Many consider Miller’s work with Daredevil: Born Again to be as complete a story about the character as possible, using the interplay between good and evil as well as Murdock’s own inner madness at the hands of Kingpin as major plot drivers.

While this is simply speculation, there is some chance because of its length and story in general that Daredevil: Born Again could end up being something like a Netflix reunion before it’s all said and done. We know from a Giant Freakin Robot Exclusive that Jon Bernthal is reprising his role as Punisher and there’s word that Krysten Ritter could be back as Jessica Jones as well. As for Mike Colter as Luke Cage and Finn Jones as Iron Fist, there has been much less on that front.

Plus, with all of the New York ties we’ve seen already, Hawkeye, Echo, and others could make their way back into the mix here as well. Marvel is using this as a hub, much like in the comics so considering the length of the series there’s almost no reason not to include everyone they can if possible.

Oh, and just a heads up, but Captain America does appear in the Daredevil: Born Again story so there’s some chance of a Sam Wilson/ Anthony Mackie appearance as well.

DAREDEVIL: BORN AGAIN IS PLANNED FOR SPRING 2024 ON DISNEY+

Even with all of the excitement, it’s going to be a while until we see Daredevil: Born Again on Disney+. The plan is for it to hit the stream in Spring 2024. So we are looking well more than a year-plus. There’s sure to be plenty that happens in the Marvel Cinematic Universe that will set the stage for the show and we will be on the lookout for more notes and castings. 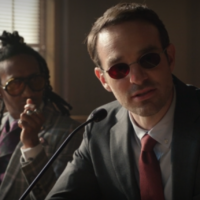