Clint Eastwood was known for doing a number of his own stunts but sometimes he needed someone else to step in for some of the more dangerous gags. When those moments came up, Wayne “Buddy” Van Horn would take the reins. With over one hundred stunt credits to his name, there is no argument that Buddy Van Horn was one of the absolute greatest of all time. And now, he has passed away at the age of 91.

Stunts were not the only way that Clint Eastwood and Buddy Van Horn collaborated over the years. Van Horn also directed three films that starred Eastwood: Pink Cadillac, The Dead Pool, and Any Which Way You Can. The Dead Pool was the last entry in the popular Dirty Harry series that began in 1971 and the title would go on to be part of the inspiration behind the now-iconic Marvel superhero, Deadpool. Any Which Way You Can was another sequel to an Eastwood movie, Every Which Way but Loose, which paired the iconic tough guy with an orangutan partner named Clyde. And Pink Cadillac was a comedic outing for the usual action star.

But while Buddy Van Horn primarily saw himself attached to just Clint Eastwood projects, there were plenty of other memorable movies that benefited from his talents. He would be credited for stunts on two fantasy films in the very same year: The Sword and the Sorcerer and The Beastmaster in 1982. He was even the stunt double for Zorro in the Walt Disney television series that ran from 1957 to 1958. He would also act as the stunt coordinator on major studio productions like Outbreak, The Deer Hunter, and Crocodile Dundee II. With credits dating back all the way to 1950, Buddy Van Horn’s career ended up spanning over half a century of movies and television.

Clint Eastwood did offer a statement to Variety in regards to the passing of his longtime collaborator and friend. “Buddy has saved my life throughout the years,” said Eastwood. “He took all my hits. I will miss our talks as he always made me laugh. He was a true friend.” If you look at Buddy Van Horn’s IMDb page, you will see that the latter part of his career was primarily filled with credits on Eastwood’s directorial projects. He even performed the role of the stunt coordinator in Rails & Ties, the directorial debut of Alison Eastwood, Clint’s daughter. It is clear that he had a strong relationship with the Eastwood family and was probably a part of the crew in a way that few behind-the-scenes figures often are.

We would encourage you to pick any of the movies that Buddy Van Horn worked on and give them a watch to memorialize one of the best in the business. You can pick any of the numerous Clint Eastwood movies he worked on, one of his other projects, or you could even watch Baby Driver in which the Jon Hamm character was named after the legendary stuntman. There are numerous ways to remember the man as he leaves behind a powerful legacy. 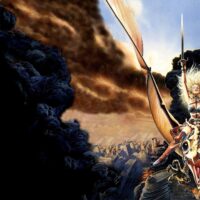