Pretty much even before Chris Evans made his final appearance as Captain America in 2019’s Avengers: Endgame, the fans were dying to know whether or not he’d ever return. After all, even though the fate of Steve Rogers has come into question, in the comics an elderly Steve Rogers managed to still be an active Avenger. Doing press for Pixar’s Lightyear has given Evans the chance to give what seems like the final word on the matter. The verdict is that we shouldn’t hold our breath.

Speaking on the D23 Inside Disney podcast (via Comic Book), Chris Evans said the idea of returning to the role of Captain America didn’t feel right. “No, I don’t think so,” Evans said on the possibility. “I mean it was a really unbelievable ride and the character’s just so dear to me and I’m just so precious with it.” Evans pointed out that in a sense it isn’t his role to return to anymore, since the character of Sam Wilson took the mantle of Captain America in Disney+’s The Falcon and the Winter Soldier. “To return to the role, I mean the truth is, the role isn’t even mine anymore. The role is Anthony Mackie’s. So, you know, even if there was a different incarnation, not as Captain America, but you know for Steve Rogers, even that would feel… I’d be very cautious, just because I love that chapter of my life professionally, personally. I love what those movies accomplished and to revisit it and potentially have some weird extension to that legacy would be upsetting if it didn’t land.”

So Chris Evans doesn’t quite give us a 100% definite “no,” but he comes pretty close. If it doesn’t seem like it would be perfect, he says, it would tarnish an otherwise wonderful memory. It’s hard to argue with his logic. After all, since first appearing as Steve Rogers in 2011’s Captain America: The First Avenger, Evans has appeared in a grand total of 11 Marvel Studios movies. To play the same character in 11 movies (more or less, considering he was actually playing Loki impersonating Steve Rogers in Thor: The Dark World), and to come out the other side not only feeling good about it but to have your performances remain highly regarded? That’s a rare feat and so it makes sense Evans would be protective of it.

Perhaps the most curious thing Chris Evans said during the podcast was in regards to his hesitancy with the idea of returning as “a different incarnation, not as Captain America, but you know for Steve Rogers.” On one hand, he may simply be referring to the idea that he could come back as an elderly Steve Rogers. On the other — with Marvel’s current focus on its Multiverse — could he be referencing the possibility of returning as a Steve Rogers variant? After all in both the comics and the MCU’s own What If…? animated series there have been plenty of variant Steve Rogers. There’s the bald Steve Rogers draped in an American flag from Earth X. There’s the Venomized Steve Rogers who was bonded with the Venom symbiote. There’s the Steve Rogers who was the Sorcerer Supreme, the Zombie Steve Rogers, and the Steve Rogers from Bullet Points who became Iron Man. There’s even — in the same alternate timeline that gave us Peter Porker the Spectacular Spider-Ham — Steve Mouser, aka Captain Americat.

Whether we ever see Chris Evans as either the 616 Steve Rogers or a variant of the hero, he has shown interest in playing another old Marvel role of his. Earlier this month during an interview, Evans responded to the idea of returning to the role of Johnny Storm aka the Human Torch as part of the MCU’s multiverse with “God, wouldn’t that be great? Wouldn’t that be great?” 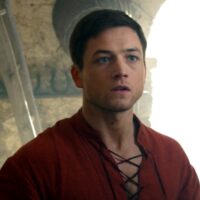