The Fast & Furious franchise is getting set to wrap its original story over the next couple of years with the penultimate installment, Fast X, just getting underway with its production over the last week or so. It’s setting up to be another massive movie for the franchise and a number of old favorites are getting back into the mix for this one. One of them will be Charlize Theron who is returning to her role as Cipher for the film. The actress shared some shots of her getting into character on set and from the looks of things, she’s very much back in character.

The Fast X shots of Charlize Theron went up on her Instagram feed and show the actress very much looking the part once again. In one of them, she’s standing in an elevator, apparently having taken out a couple of folks wearing body armor. And in the other she standing on set preparing for a scene. With the caption, “She’s back baby,” Charlize Theron confirms that Cipher will have a role in this story. Check out what Charlize Theron posted on Instagram in anticipation of getting this next installment of the Fast & Furious franchise.

Charlize Theron first appeared in the Fast & Furious franchise for the eighth flick, The Fate of the Furious. Her character Cipher is a cyberterrorist who initially is able to coerce Vin Diesel’s Dom Toretto into working for her. She would also go on to appear in the ninth movie, F9 which released last summer. Cipher’s ongoing feud and battles with Toretto have made up some of the backbone of the last two movies and it’s clear that they will be at odds again in this tenth movie. With the sheer number of folks who are back for this next flick in the franchise, it’s unclear just how big of a role she will have. But it’s very cool to have her in the mix.

Along with Charlize Theron, a number of other notables are returning for Fast X. Of course, Vin Diesel is back leading the charge and some of the earlier characters will be here too with Michelle Rodriguez, Jordana Brewster, Tyrese Gibson, Chris “Ludacris” Bridges, and Sung Kang all back. Plus John Cena will reprise his role as Jakob Toretto, and Jason Momoa is cast in an undisclosed villain role as well. Daniela Melchior and Brie Larson are on board as well in a star-studded affair that is likely to have the action dialed all the way up once again.

As for Charlize Theron, in addition to having a part in wrapping up the Fast & Furious franchise, she’s also got some other higher-profile productions in the works as well. There’s The School for Good and Evil which is coming to Netflix this year and is based on the popular fairy tale novels of the same name. And she’s also going to follow up with another Netflix movie, Old Guard 2, which will have her reprising her ancient Andy character. In terms of Fast X, we’ll see her on the big screen again as Cipher when the film releases on May 23rd of next year. 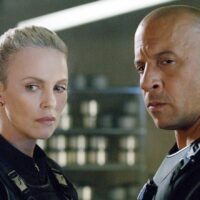