Chadwick Boseman just won a major award for outstanding work he did just prior to his tragic passing two years ago.

Chadwick Boseman has received a posthumous Emmy Award for his voiceover work in Marvel’s What If…? series. The Black Panther star, who lost his battle with colon cancer in 2020, won the award at Saturday’s Creative Arts Emmys presentation at the Microsoft Theater in Los Angeles. Marvel Studios celebrated the moment with a post on social media. “Thank you to the Television Academy for recognizing the outstanding work of our King, the late Chadwick Boseman,” the Tweet read.

According to The Hollywood Reporter, the actor was nominated in the category alongside other talented performers like Moon Knight’s F. Murray Abraham, Bridgerton’s Julie Andrews, Big Mouth’s Maya Rudolph, Central Park’s Stanley Tucci, and What If…?’s Jeffrey Wright. Jessica Walter, who is also deceased, was also nominated for her work in Archer. Chadwick Boseman’s wife Taylor Simone Ledward accepted the Outstanding Character Voice-Over Performance Award on her husband’s behalf and shared a few words about the honor.

“When I learned Chad was nominated, I started thinking of everything that was going on in the world and being so in awe of his commitment and dedication,” she said via Deadline. She also expressed how happy she was that one of the last things he worked on was something important to him, and the world. “You can’t understand your purpose unless you ask what if? What if the universe is conspiring in my favor? What if it’s me? Chad would be so honored and I am honored on his behalf,” Ledward said in closing.

Chadwick Boseman previously received a posthumous Academy Award nomination for his work in Ma Rainey’s Black Bottom, an adaptation of the popular August Wilson play. The actor also won a Golden Globe award for the same role. The George C Wolfe-directed film tells the story of Ma Rainey, an influential blues singer in the 1920s. Boseman plays Levee Green, a talented trumpet player who hopes to break away from Rainey in an attempt to secure his own record deal.

The Marvel alum’s legacy remains inseparable from mainstream culture since shattering racial stereotypes when he became the studio’s first leading black superhero. He starred in Captain America: Civil War, Black Panther, Avengers: Infinity War, and Avengers: Endgame. Chadwick Boseman was supposed to reprise his role in a second Black Panther movie which is scheduled for release on November 11, 2022. The story sees the leaders of Wakanda fighting to protect their nation from invading forces in the wake of King T’Challa’s death.

Black Panther: Wakanda Forever will be a direct sequel to its predecessor, and the 30th film in the Marvel Cinematic Universe. Ryan Coogler will return to helm the project, working from a script he co-wrote with Joe Robert Cole. The film will feature familiar stars like Lupita Nyong’o, Danai Gurira, Martin Freeman, Letitia Wright, Winston Duke, Angela Bassett, Dominique Thorne, and Danny Sapani. Although rumors have swirled online, there hasn’t been any official news about who will step in Chadwick Boseman’s role as Black Panther.

Meanwhile, Chadwick Boseman left behind an impactful legacy, both on- and off-screen. The passion he had for his community made him a real-life hero, inspiring him to choose roles that uplifted and celebrated black voices. Besides his work as the iconic superhero, he also portrayed historical figures like Jackie Robinson in 42, Thurgood Marshall in Marshall, and James Brown in Get On Up. 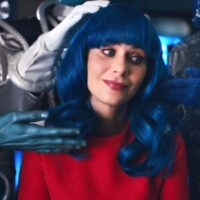 Zooey Deschanel Was Supposed To Be An Avenger