Paramount+ Just Saved A Fan-Favorite Show From Being Canceled

Paramount+ has rescued a fan-favorite series after its home network decided to let fans down and cancel it.

After more than a year of negotiations, Paramount+ has finally given their Criminal Minds revival a 10-episode series order. The reboot was first announced in February 2021, when the streamer still operated as CBS All Access. The series went through a long development process and protracted deals with the cast. There were even premature reports that the project had been scrapped. The actors’ contracts had apparently been contingent on the show’s producer, Erica Messer signing a pact with ABC Signature where she is under an overall deal, according to Deadline.

Messer, who is also the showrunner on Paramount’s Criminal Minds, closed her deal to return a few months ago. Earlier this week, series veteran Joe Mantegna teased the show’s return on social media with a photo of himself inside a soundstage. The caption alongside the image simply said, “Just doing a little inspection today for an upcoming project. #CriminalMinds.” According to The Hollywood Reporter, Kirsten Vangsness, Adam Rodriguez, A.J. Cook, Tyler, and Paget Brewster are also returning for the revival.

Missing from Paramount’s cast list is original series star, Matthew Gray Gubler who previously indicated that he was ready to move on after playing Spencer Reid for 15 years. Daniel Henney won’t be reprising his Criminal Minds role either as he currently stars in The Wheel of Time. However, guest appearances haven’t been ruled out since the actors’ agreements for the crime show are multi-year and not fully exclusive. This means they can do major recurring roles on ongoing series and series regular parts on limited series if production schedules allow it.

Billed as a police procedural crime drama, Paramount’s Criminal Minds was created and produced by Jeff Davis. The series premiered on CBS in 2005 and concluded after 15 seasons. The story follows a group of criminal profilers who work for the FBI as members of its Behavioral Analysis Unit. Using behavioral analysis and profiling in their investigations, the team goes in search of unknown subjects or “unsubs” – the team’s nickname for perpetrators. Viewers also follow the team as they tackle everyday personal struggles.

The show’s popularity resulted in two spin-offs. Criminal Minds: Suspect Behavior which ran for one season in 2011, and Criminal Minds: Beyond Borders which ran for two seasons from 2016 to 2017. However, unlike the long-running CBS series which typically resolved its cases at the end of each episode, the Paramount version of Criminal Minds will be serialized. This means fans get to see the Behavioral Analysis Unit team working on a single case throughout the 10-episode season.

News of Paramount finally giving the Criminal Minds revival the green light isn’t all that surprising. According to Nielsen, the original series is consistently ranked among the most watched acquired shows on Netflix. While Paramount+ has all 15 seasons, Netflix carries the first 12 which accounted for 33.9 billion minutes of viewing on the global platform. Moreover, the crime drama was Netflix’s third-most-streamed series in 2020 behind The Office and the ever-popular Grey’s Anatomy, with 590M hours viewed. 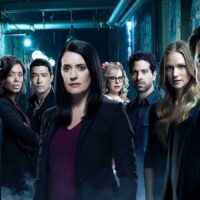