Camila Cabello Is Trying Acting, Starring In A Surprise Movie About To Be Released

Camila Cabello has had an accomplished career as a musician, rising to popularity in the band Fifth Harmony, before truly breaking out as a solo artist. Cabello has already had multiple platinum records, topped the Billboard 100, and won tons of awards. But now, Cabello is making the leap to film, as the singer is starring in a new iteration of Cinderella, coming out this February.

Camila Cabello’s new version of Cinderella was announced in early 2019, and was fast-tracked by Sony into production. This version is said to be a modern reimagining of the story, will be music-oriented – fitting considering Cabello’s casting – and is based on an original idea from James Corden.

This new version of Cinderella starring Camila Cabello comes from writer-director Kay Cannon, who made her directorial debut in the 2018 film Blockers. Cabello has an extensive writing career, having written for such shows as 30 Rock and New Girl, while also writing the Pitch Perfect trilogy and 2019’s adaptation of the John Green novel, Let It Snow for Netflix.

Yet Camila Cabello will have an impressive cast to help support her in her first major acting role. Billy Porter of FX’s Pose will be playing Cinderella’s fairy godparent, while Idina Menzel, who voiced Elsa in Frozen, will play Cinderella’s stepmother. Pierce Brosnan and Minnie Driver will portray King Rowan and Queen Beatrice, respectively, while John Mulaney, James Corden, and Romesh Ranganathan will play the footmen/mice. Presumably, they will voice these characters, although it’s unclear if they will also portray the characters in their human form.

While there have been dozens of different film adaptations of Cinderella, going all the way back to 1899, the most famous versions of the story have come from Disney. Beyond the 1950 animated classic, Disney also remade the film starring Brandy and Whitney Houston in 1997, while 2015’s live-action remake was a huge hit for the studio, prompting the company to make even more remakes of their animated films. This Camila Cabello version by Sony could become the biggest Cinderella story outside of Disney.

Considering the impressive singers involved in this production, it shouldn’t be a surprise that Cinderella will also feature some original music as well. Idina Menzel confirmed on her Twitter that both Camila Cabello and herself would have original songs in this adaptation. This version of Cinderella originally started production in February 2020, but was shot down in March because of the COVID-19 pandemic. The film resumed shooting in August and concluded in September.

If Disney has proven anything with Cinderella, it’s that there is room in the world for multiple interpretations of this story to be told. With Sony attempting to tell the story, the studio does have an impressive roster that includes a writer-director known for mixing musical performance and comedy, and a talented lineup of musicians to craft this more musical-focused version of Cinderella. Even though this is Camila Cabello’s first major production, the singer is certainly in good hands with the filmmakers and other actors that are there to support her in her acting debut. 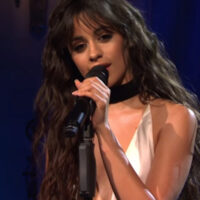