Related:
Brad Pitt And Sandra Bullock Wanted To Make A Movie About Getting Divorced

Bullet Train, from stunt-actor-turned-film-director David Leitch, is a rip-roaring action caper with an incredible ensemble cast led by Brad Pitt. Pitt stars as an assassin aboard the Japanese high-speed train alongside fellow passengers Joey King, Hiroyuki Sanada, Aaron Taylor-Johnson and Brian Tyree Henry. For a portion of the film, Pitt wears a bucket hat, but when the bucket hat leaves Pitt’s character, known only as Ladybug, lets loose a perfect mane of long flowing blonde hair, which according to Cinemablend, was a massive distraction to his co-star Brian Tyree Henry.

Brad Pitt’s performance as Ladybug, an assassin keen to resolve conflicts in a non-violent manner after a bout of therapy, is one of the highlights of Bullet Train. Pitt uses all of his remarkable acting talents to create a wonderfully comic persona and his long flowing hair only adds to the hilarity as it swings about in the movie’s numerous action set-pieces. Cinemablend learned via an interview Brian Tyree Henry had with Comicbook that the actor thought Pitt’s long hair was not only distracting, but downright infuriating. Henry explained his frustration during one particular scene: “there’s this wind fan that’s just perfectly placed for Brad Pitt and so I would literally forget some of my cues because I’m so busy lost in this wheat blond, beautiful hair. And like he’s so good at hair control that like he knew exactly when to whip it, and it just made me want to punch him in the face more.”

Given that Brian Tyree Henry is a Tony and Emmy Award nominated actor, famous for television roles such as Alfred Miles in Atlanta and for being a member of the ensemble cast in Marvel’s Eternals, forgetting one’s cues is kind of a big deal and speaks to the sheer power of distraction Brad Pitt’s hair in Bullet Train must have possessed. Henry’s jovial recollection of the hair feeds into Bullet Train’s humor. The comic tone and witty banter evident throughout Bullet Train have also been on display during the film’s press tour. During the Los Angeles Premiere of the movie, with the rest of the cast assembled on the red carpet to be photographed by the world’s press, Brad Pitt stole the show with an elegant pirouette in front of his fellow cast mates, much to everyone’s delight.

Director David Leitch once again shows his ability to weave comedy and action set pieces together, much as he did with Deadpool 2 and Brad Pitt and Brain Tyree Henry are two of the leading examples of this in Bullet Train. Unsurprisingly then, all three parties have exciting projects to look forward to in the near future. Leitch’s next film is an adaptation of the 1980s series The Fall Guy, and it recently added Emily Blunt in a lead role alongside Ryan Gosling. Brad Pitt has a film with George Clooney lined up as well as a film about the world’s premier motorsport Formula 1 planned with Top Gun: Maverick director Joseph Kosinski. Brian Tyree Henry will be able to forget all about Brad Pitt’s long-flowing hair thanks to future projects like Spider-Man: Across the Spider-Verse, where he reprises his voice-acting role of Jefferson Davis. 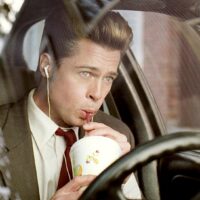