Bruce Willis is John McClane. That character is at the top of any Bruce Willis list as most popular. But over the course of Willis’ career, he has portrayed many other cop characters. Jimmy Monroe is another cop character Willis has portrayed and while he may be well less known than McClane, Willis’ Monroe can be seen in the movie Cop Out, which has just been added to the Netflix library.

Cop Out is the 2010 Bruce Willis-led buddy cop picture that director Kevin Smith paired up Willis with comedian Tracy Morgan. Willis and Morgan play a pair of veteran New York Police Department detectives who are on the hunt of a very rare, mint-condition baseball card of which Jimmy was the owner.

The story finds our partners endangering civilians after they fail to capture known criminal Juan Diaz (Cory Fernandez). Because of their potentially fatal blunder, Jimmy and Paul (Morgan) are suspended without pay. The timing of this is bad since Jimmy’s daughter Ava (Michelle Trachtenberg) is to soon be married and the cost of the wedding has hit $50,000. Jimmy’s ex-wife’s husband offers to pay but Jimmy is bound and determined to somehow come up with the money. He decides to sell his rare ’52 Andy Pafko card but while he is at the card shop ready to complete the deal, the card shop is robbed by Dave (played by Seann William Scott).

During the robbery, Bruce Willis’ Jimmy discovers that Dave is going to rob a house that evening, so the two suspended cops stake out the home in order to get the rare baseball card back and the gun Dave used to rob the card store. When they finally catch Dave and arrest him, he has already sold the card and gun for drug money.

Now the hunt is on for the card. Jimmy and Paul go to the drug dealer Poh Boy (Guillermo Diaz) who tells the cops that he’ll return the card if they retrieve a stolen car. They comply but when they get the car, they find a woman, Gabriela, in the trunk. She just happens to be the mistress of the drug lord Poh Boy’s gang murdered.

Eventually, things lead back to Poh Boy when Jimmy and Paul are in a shoot-out with Poh Boy’s gang. Jimmy and Paul survive, but what about Jimmy’s rare baseball card?

The making of Cop Out was not without its share of controversy. Tension between superstar Bruce Willis and Kevin Smith was at a high, with both pointing the finger at the other. The two had first met on the set of the third Bruce Willis/John McClane picture, 2007’s Live Free or Die Hard. By all accounts, the filming was a good experience. But when the duo hit Cop Out, things went south fast.

Kevin Smith got the ball rolling in 2011 when he came out railing against Bruce Willis on WTF with Marc Maron by telling the host that Willis “wouldn’t even sit for a fucking poster shoot.” He eventually told Maron that “were it not for Tracy, I might have killed either myself or someone else in the making of fucking Cop Out.” All because of Bruce Willis.

On the contrary, a talent rep who was associated with the movie’s production laid the blame on Smith, saying Smith’s constant use of marijuana on the set was the main issue. The rep confirmed the conflicts on the set between Bruce Willis and Kevin Smith but landed on the fact that Smith smoked way too much, he never interacted with the actors, making the actors feel like they were always on their own.

Even with the set being as combustible as it was, the film overall was the highest-grossing for Kevin Smith, though that isn’t saying much. He was given $30 million to play with and the movie grossed close to $56 million. Unfortunately, the critics and audience didn’t care for the film.

Things between Bruce Willis and Kevin Smith hit their zenith when Smith wasn’t asked to be part of Comedy Central’s Roast of Bruce Willis. But as they say, time heals all wounds and that now appears to be the case between the two. Smith even shared his side of the story on his Fatman Beyond podcast. He explained to his listeners that he received a few phone calls from an unknown number but never answers those. He then got a text from the same number saying, “Dear Kevin, I have pictures I want to send you. I need your home address. Love, Beedub.” Well, the only “Beedub” Smith knew was Willis. He responded to the text with, “Bruce?” Smith was thrilled. He told his audience, “Fuckin Bruce Willis texted me! Out of fucking nowhere, man.” Smith went back at Bruce, asking the actor if they could chat on the phone, which they ended up doing. Fences now seem to be mended.

As for Bruce Willis, his once red-hot career has turned into a forgettable run of B-movies. It’s not all doom and gloom as it pertains to his career – strange may better describe it of late. The last six or so years have seen Willis continue to nab roles in bigger movies such as Frank Miller’s Sin City: A Dame to Kill For, Death Wish, Motherless Brooklyn, and the final chapter in the Unbreakable trilogy, Glass. But Willis has also been a part of some truly unremarkable movies such as 10 Minutes Gone, Trauma Center, Hard Kill, and Cosmic Sin. These movies are a far cry from his Planet Hollywood days where he, along with megastars Sylvester Stallone, Arnold Schwarzenegger, and Demi Moore ruled Hollywood.

There seems to be no rhyme or reason as to how Bruce Willis chooses his movies. His upcoming schedule looks to be much of the same B-movie schlock, though he does have a couple of films lined up that looks promising. Of course, there is always that incessant rumor that Bruce Willis is primed and ready to go one more time as everyone’s favorite New York cop, John McClane. But other than the recent commercial, chances of a return look to be dimming. One can always hope. 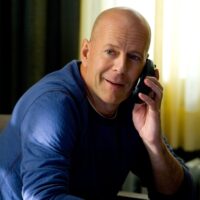