That would've been something, alright.

While Tatiana Maslany may be giving critics and audiences everywhere something to talk about as the star of Disney+’s new series She-Hulk: Attorney at Law, many don’t realize that she wasn’t the first actress to land the role of the big green lawyer for an on-screen production. Back in 1991, Brigitte Nielsen, who had begun to establish herself as an action based actress during the ‘80s, teamed up with Marvel to bring the world what would have been a big screen iteration of She-Hulk. And thanks to the podcast Best Movies Never Made, fans are being treated to pictures long thought lost in the past.

Taking to their Twitter account, the podcast released several images from the movie that would have seen Brigitte Nielsen star as the titular She-Hulk. Much less green than Maslany’s version of the hero in the Disney+ series, Nielsen’s She-Hulk has the big hair of dreams and is wearing an uber revealing green outfit, but with her un-greened skin underneath. And, how would we know she’s She-Hulk without neon green lipstick and eyeshadow? Don’t worry, you’ll know as both are prevalent in the promo photos. Pulling it all together are long, black gloves, perfect for punching baddies right in the face. You can see the images for the unproduced project below.

Initially made famous through her career of modeling, Brigette Nielsen landed several film roles prior to her side-swipe with She-Hulk. The year 1985 was a huge one for the new-to-the-scene actress as she made her feature performance debuts in both Red Sonja and Rocky IV. With a new Red Sonja centered film now in production, the Richard Fleischer helmed feature has been pushed back into the limelight. Along with Nielsen, another muscle bound performer of the time, Arnold Schwarzenegger, starred in the feature.

For those who are paying attention, had Brigitte Nielsen’s take on She-Hulk gone into production, it would have been her second Marvel based feature following the sword and sorcery film. As for her time appearing in the Rocky universe, her appearance in Rocky IV coincided with the first year of marriage to her co-star Sylvester Stallone. The two would again appear side by side in the action blockbuster Cobra which came out one year before the couple ended their marriage. Nielsen would again appear in the boxing centered franchise in 2018’s Creed II.

While we were ultimately never blessed with the glory of seeing Brigitte Nielsen starring in a She-Hulk centered flick, we can thank Disney+ and series creator Jessica Gao for bringing us She-Hulk: Attorney at Law. The series stomped on to the streamer just a few weeks ago and has had fans chatting about its potential. Maslany stars as Jennifer Walters, a lawyer who represents superhumans and also turns into the titular hero. The Marvel project also boasts a top line cast consisting of Mark Ruffalo, Jameela Jamil, Ginger Gonzaga, Josh Segarra, Mark Linn-Baker, Tess Malis Kincaid, Tim Roth, Jon Bass, Renée Elise Goldsberry, Benedict Wong, and Charlie Cox. 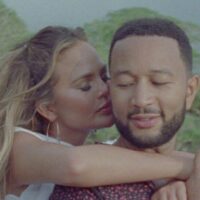 Exclusive: John Legend And Chrissy Teigen Are In She-Hulk