Listen, we get it – Brie Larson is absolutely ripped. The Marvel star is constantly taking to Twitter and Instagram to give fans a behind-the-scenes look at her daily workouts so that many of us can live vicariously through her from the comfort of our own couches. Today, in a video, the Academy Award-winner showed us one of her greatest challenges yet – taking on the Grand Teton in Grand Teton National Park.

The beginning of the Instagram video shows Brie Larson tackling some training in a controlled session at a rock gym. There, she scales the plastic walls with colorful fake outcroppings, planning her trip of a lifetime to the park in Wyoming. For the outdoor enthusiasts or audiences who watched the harrowing climbing story, Free Solo, you can spot famed scrambler Alex Honnold training alongside Larson.

Honnold kept viewers’ palms sweaty in the 2018 film that saw him climb Yosemite National Park staple, El Capitan, with no safety gear holding him in place should he fall. Spoiler alert – he made it, but even with that knowledge, the film is worth a watch to fully understand the physical limits one can push their body to. With Honnold cheering her on, Brie Larson was clearly in great hands on her road to the Tetons.

The rest of the video reveals Brie Larson’s trip up one of the most notable rock faces in the United States. Climbing alongside her is another huge name in the climbing community, Jimmy Chin, a mountaineer who’s known for his stunning photography work – with much of his material being taken while dangling off the side of trails and peaks. Though she sounds unsure of her every move and even wonders when the group will get to their destination, Larson absolutely nails the climb, safely arriving at the top of the peak – now it’s time to come down.

Just like any great Hollywood celeb, Brie Larson has a host of famous names sounding off in her comment section. Black Panther and Creed star Michael B. Jordan writes that he’s “proud” of his pal, while Reese Witherspoon, who starred in the 2014 outdoor adventure film Wild, tells Larson that she’s “scaring” her. Always one to bring the humor, Larson’s caption asks what singer Miley Cyrus says, referencing the singer’s 2009 song “The Climb.”

Brie Larson better be careful making her way up and down mountains as the actress has a full lineup of projects in the works for her job in front of the camera. She’s recently wrapped filming on two action-packed productions, Fast X and The Marvels. The first will see her joining the Fast & Furious franchise in a role without many details surrounding it, while the second will see her returning to the MCU in her role as Captain Marvel.

For those who’ve loved seeing Brie Larson on the smaller screen in hits including The United States of Tara, the actress is finally returning to that formatting for a series titled Lessons in Chemistry. The Apple TV+ show will center around a female scientist (Larson) in the 1960s who uses the platform of a cooking show to educate housewives on chemistry. Watch Larson tackle her toughest challenge to date in her nail-biting Tetons climb above. 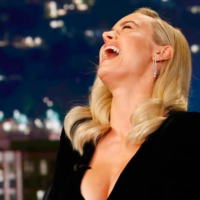