See The First Look At The Bridgerton Prequel

The rumors in the Ton this season are true and a new spin-off made its debut at Netflix’s TUDUM fan event on Saturday. Reports from Movieweb confirm this debutante’s introduction to society as Queen Charlotte: A Bridgerton Story, which chronicles the monarch’s early years and how she came to be such an influence on the Bridgerton setting. Series showrunner Shonda Rhimes and her production company Shondaland released the title and first-look photos prior to the event.

Fans of the Ton know what an immense influence Queen Charlotte has upon the Bridgerton universe, and will be delighted to find that the story documents the Queen’s own love story with King George. India Amarteifio stars as a Young Queen Charlotte and is shown in a two-minute clip trying to escape her family residence by climbing over a wall. When she asks a passing gentleman for assistance, she is shocked to discover that the handsome man is the very betrothed she is trying to escape.

Such love entanglements are what makes Bridgerton so worthy of Lady Whistledown’s letters, and Queen Charlotte: A Bridgerton story promises to show us more about how Queen Charlotte rises to social prominence and monarchal power, able to guide the Ton for future generations.

Fans will be further delighted to hear that this is only the first of proposed spin-offs in the world of the Ton. Netflix’s Bela Bajaria has given us cause for home when she commented, as reported by Marie Claire, “Shonda and her team are thoughtfully building out the Bridgerton universe so they can keep delivering for the fans with the same quality and style they love. And by planning and prepping all the upcoming seasons now, we also hope to keep up a pace that will keep even the most insatiable viewers totally fulfilled.”

Bridgerton was based on the series of novels by Julia Quin. The show was created by Chris Van Dusen and represents the first scripted property offered by Shondaland. Depicting romantic intrigue in a wealthy part of London during the Regency era, the show has already been released for two seasons. The machinations of Queen Charlotte and her good friend Lady Danbury influence love and marriage in the Ton as unmarried ladies and gentlemen perform the dance of courtship.

In the background with a watchful eye is Lady Whistledown, the pseudonymous writer of a very popular gossip newsletter that reveals some of the Ton’s most scandalous secrets. Lady Whistledown’s pen has almost as much power to make or break a potential match as the Queen herself, much to the dismay of Her Majesty and any who fall afoul of the newsletter’s notice.

Bridgerton Season 1 and 2 are available to watch on Netflix. Queen Charlotte: A Bridgerton Story is scheduled to be released in 2023. Will it be the season’s diamond? Only time will tell, but of one thing you can be sure: there will be plenty of romance and heartbreak for eager fans. 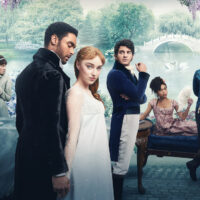 Tom Hanks Has A Surprising View On Hollywood Nepotism